- May 17, 2012
I said on Saturday that I was making Turkey Pin Wheels with Red Peppers for dinner last night, in my What We Are Eating This Week Post and I was asked by several people for the recipe on Facebook and Twitter. As I am terrible with giving recipes in a timely manner I thought I would put this one up as quickly as I could. We were sent some Peppadew Peppers as I had been asked to take part in a British Turkey Recipe Competition and as usual I've not done anything about it (like gone to buy Turkey so I could be reimbursed as they suggested) but the peppers were sitting in the cupboard taunting me every time I looked in there and I knew I had to do something. 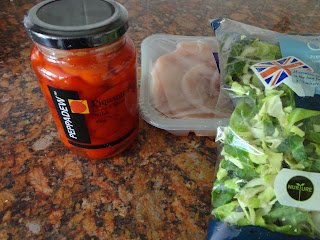 I had a packet of Turkey Quick Cook Breast Steaks in the freezer which I defrosted and then bashed thinner using my rolling pin (and some baking paper as I had run out of cling film). I then added some sliced greens and a couple of the peppers sliced in half and rolled the Turkey around the filling. 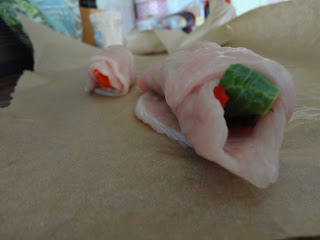 I used some toothpicks to keep the turkey together and then put them in the oven on Gas Mark 4 for thirty minutes. They smelt really lovely and despite having said I would make it with Rice I really wasn't in the mood for rice and so with agreement from Daddy I made some Hash Browns to go with it. 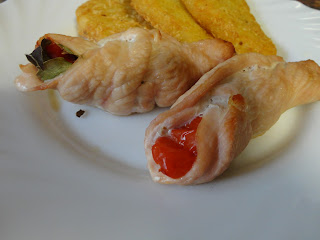 Daddy really loved the Turkey Pin Wheels and asked me to make it again but I think that the next time I make this I would chop the peppers more finely and mix it in with some Cream Cheese and Spinach instead of Spring Greens. The peppers were hotter than I expected, and I think that the Cream Cheese would just make it more suitable to my palate. I'll let you know how it tastes like this in a couple of weeks!

I received a jar of Peppadew Peppers and was offered to be reimbursed for a selection of Turkey cuts, but as I buy Turkey regularly I didn't see the point!
Main Meal