Or How Much BB loves Mario Party 9!


For the last few weeks there has been a big Mario revival in our house, with our Sunday nights gaming mainly revolving around playing Super Mario Party 9. Daddy had brought the game for us a few days after it was first released as he knew that it was going to be a big hit, especially with Big Boy who has a huge obsession with all things Mario! 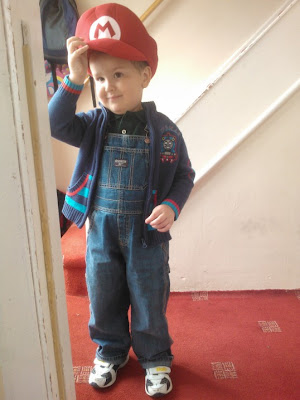 When we were sent a copy of Mario Party 9 (along with lots of things to have a special Mario themed Party) we knew that we had to have a party and as a late Easter gift gave my Sister and her family our duplicate copy of the game. Big Boy decided that he wanted to have a proper Mario party for his birthday and so our Mario Party got delayed from Easter to today!


I did most of the prep for the party and I made a King Boo from Mario Birthday cake, some bunting, some hats, some napkin rings and even decorated our front window too! The details for the bunting, hats and a cake recipe can be found in the Mario pdf I've uploaded, so you too can have your own Mario party. 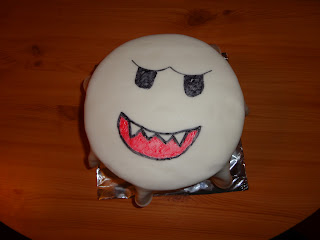 The game is fantastic, it's a board game that you play via the Wii, and we have been playing it every other Sunday as part of our Family Nights. We love the game because it is never the same game; there are 80 mini challenges so there seems to be different options every time, there are different routes that can be taken and different lands that can be played in too. Big Boy and I play it during the day as a reward for good behaviour and Big Boy has even played by himself a couple of times, as you can choose to play solo if nobody else wants to play with you.

The great thing about this game is that it is a family game, it's something that we all play together (for the most part) and we can set handicaps so that even when we are playing games which BB might not have the Wii control skills for, he isn't at too much of a disadvantage.

Today we are off swimming before coming home to play Operation, a game or two on BB's new DS and after school this evening we have a Mario Party 9 marathon scheduled. What more could a brand new four year old want?

Mario Party 9 has an RRP of £39.99, but can be found for less with a quick google. We received a free copy too.
Wii Game review