- May 12, 2012
I had a great meal plan this week with some meals linking in to some bits that Tops was taking part in at School. Then, as seems to always be the way, School had a change of plans (after being offered a great opportunity) and so I thought I would swap the plan around to make more sense to us as a family. Now the meal that we were all going to be looking forward to on Friday is Saturdays meal.

We're having a little bit of a problem with BB at the moment as when we are eating our dinner he is not eating the meat, or the vegetables and just sticking with the potatoes or the rice. I'm trying to make things a little more tempting for him and this week we are veg heavy, but I'm going to serve them in ways that I hope will tempt BB. We are also growing a lot of veg at the moment thanks to Birds Eye and my birthday gift of two mini Greenhouses and hopefully this will also help BB to eat more variety again.

For dinner I'm making Grilled Breaded Prawns and I was just going to do home made chips but I decided instead to do some oven baked chips of Potato, Carrots, Sweet Potato and Beetroot. I thought that that the beetroot might change the colouring of the other chips and with hidden beetroot and carrots amongst the chips we might get more nutrients into BB than normal!

Knowing Daddy he'll have some Sweet Chilli Dip with the Grilled Breaded Prawns, but I'll make some pink dip for Tops, BB and I either by mixing some Mayo with Tomato Ketchup or Tomato purée.

For us Sunday is Roast Day. As Daddy normally gets up with the Children they all eat something early for breakfast and then they eat again when I wake up. With us all having something fairly late on a Sunday it means that we push back the Sunday Roast to around 3pm and we don't eat an evening meal.

For this Sunday I'm thinking that we will have our Traditional Roast Chicken. We tend to go with Roast Chicken because out of all the joints that we like (eg Pork, Lamb, Beef, Chicken) it's Chicken that works out the cheapest and on a budget that's important. I'll roast it with Rosemary and Garlic as it was nice when I did that a couple of weekends ago and I want to use my Rosemary plant for the purpose we brought it! 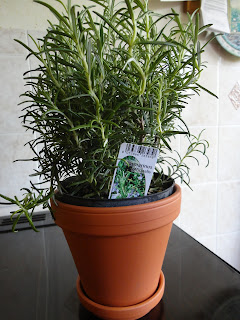 Big Boy and Tops (and Daddy) will have beans and cheese with theirs, but I'll go with some green stuff (again it's being used later in the week) or possibly some beetroot if there is any leftover!

Big Boy is turning Four today! Daddy is taking the day off so that we can spend it with Big Boy, we have spoken together about what Big Boy would like to do and he has decided he would like to go Swimming and as it is his Birthday he gets to choose what we eat in the evening, those are the rules in this house! Big Boy is really into Mario and thanks to some really great Mario Party 9 bits we have some great decorations planned. Take a look on Tuesday morning for what we did decorations wise, and for some links to the downloads so you can make some of them too and of course so you can all smile at the birthday cake I'm making him!

For dinner Big Boy has been deliberating between having McDonalds (apparently his most favourite food ever. Apart from Potatoes and Noodles and Jelly and Fish finger sandwiches and Ham and Scones and Pizza and Chip Butties and whatever else I have forgotten that is.) or a Mario Dinner. As a Mario Dinner is Meatballs and Spaghetti and we always have the ingredients for them available to us we can wait until the last minute for him to decide what we are having.

A while back I was asked if I would like to take part in a recipe competition using British Turkey. I had said yes, but with one thing and another I haven't actually done anything... I should probably hunt the PR's email out shouldn't I?! Anyway they sent me some Red Peppers ready for when I do do something and I thought when I saw them in the cupboard I could do something this week. I have an idea in my head about Turkey and Red Peppers Pin wheels, I have no idea if it will work but I hope it will!

I'm thinking that I could include garlic, some Kale (or the other leafy greens that I got this week) and roll it all up and bake until cooked. I'll do Daddy's trick and make a bed of rice. I know it's stupid but because I can't "see" any vegetables in the dish I'm debating if I should serve some Carrots and I'm thinking adding honey and sesame seeds will encourage the children to eat them.

As you may have guessed reading my previous Menu plans Daddy will be at work on Thursday night and so we can have something full of Gluten and wheat tonight if we want to. I thought we all deserved a treat this week so we are going to watch a film and have a film themed dinner.

I have been thinking about Tangled a lot over the last week or so and so I thought we could make some Creamy Spaghetti (as it's long like hair!) add in some bacon, onions, mushrooms and some wilted Kale (or some other Leafy Greens) and we have a pretty scrummy meal. Well I think so at least.

I had spoken with Daddy about almost every meal that we were having and why we were eating them (he wasn't keen on the beetroot chips!) but neither of us had any idea about what we should eat this Friday and so I had to decide what our special Friday meal would be with just the help of Big Boy. Seeing as he only wanted chips he wasn't much help... but he did remind me that Top Ender had asked earlier this week if we could have Chips and Gravy for dinner.

I thought that a Beef Poutine would be great, which as far as I know is a French Canadian dish of Chips with Cheese and Gravy. I'm adding some shredded beef as I hope that BB won't notice it too much and will eat some which we can then use to our advantage in pointing out to him that he has eaten Beef. I've never made it before and I'll use Mozzarella instead of Cheese Curds, but I think it will still count as a Poutine.
Meal Plan