- October 02, 2012
Normally I take my Mum with me to see the shows at the theatre, but when Daddy knew that I had been given tickets to see Blood Brothers he was pretty certain that we would be going to see it together. Daddy and I have both seen Blood Brothers in the West End multiple times, but never with each other and with it having been our wedding anniversary this weekend just gone we thought it was about time that we went together.

If you don't know the story of Blood Brothers and you want to sound like you do, you want to tell people that it's about nature versus nurture or as the Narrator says towards the end of the show "What the British have come to call Class". Basically twin boys are separated at birth (and one of my favourite songs is sung because of it) and years later meet up (sing another song), become friends (Sing another song), fall in love with the same girl (bet you can't guess what they do then!) and then erm something bad happens (It's a musical of course they sing a song!) and I'm not telling you what because if you haven't seen it you have to go and see it! 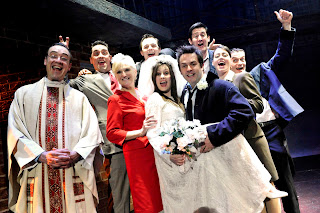 My Mum was a little annoyed that I wasn't taking her because she had seen on TV that Marti Pellow (Yes, The Marti Pellow of Wet Wet Wet Fame) was starring as the Narrator and she has a teeny tiny little crush on him... I didn't tell her this evening when we got back that he was looking fantastic and performed even better live as I thought that might be rubbing it in. It did make me laugh though that it was only half way through the second act that the woman sitting next to me realised that the narrator was Marti Pellow. I think she must have watched the First Act with her eyes closed! 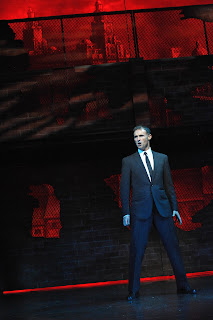 Even though Daddy and I were really sad that Blood Brothers will finish it's West End run later this month, we're quite pleased that we got to see the musical on tour with such a strong cast. It wasn't just us who felt this way though, a standing ovation for the cast was given in the theatre this evening, with the cast coming back on stage five times to take a bow.

What this production made very clear was that this is an ensemble show. Yes, The Narrator and Mrs Johnstone are the so called main parts, but it isn't a show about these two people only. I've already said that Marti Pellow played the Moody Narrator wonderfully (it was a shock when he smiled as he took his final bow!) and Niki Evans as Mrs Johnstone had me in tears at several points but both Daddy and I thought that Jorden Bird and Sean Jones who played Eddie and Mickey were fantastic and Daddy even thought out of all the times he has seen the show that Jorden Bird was the best Eddie he has seen.

Don't take our word for it though, go buy tickets and lose yourself in the Musical for the evening, just remember to take plenty of tissues!

We were given two tickets to see the show from Milton Keynes Theatre.