- October 05, 2012
Before Big Boy was diagnosed as being a Diabetic we were going through bed linen like there was no tomorrow. You see, when Big Boy had a high blood sugar his body did everything it could to make sure that it got that extra sugar out of his body and this would mean numerous trips to the bathroom but when you are four years old and sleeping soundly sometimes you don't wake up when your bladder screams for the hundredth time that it needs to be emptied. Of course at the time we didn't know it was because of his Diabetes and so every morning we would assure Big Boy that this wasn't his fault and that he would grow out of wetting the bed. We told him that there were lots of other children who wet the bed and that it wasn't anything to be ashamed of, just that we'd have to try again the next night. 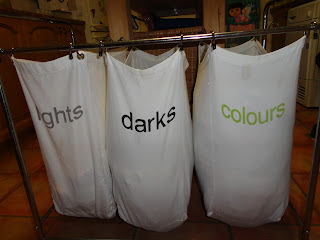 I however was getting downhearted about it. My washing machine was going what seemed like all day and night trying to keep up with the extra loads of bed linen and the sheets and bedding were starting to fade with all the washing. The most recent water bill and electricity bill showed how much washing I was doing as it was way over what we had budgeted for based on previous years, and Daddy and I have joked that I need to do a lot of sponsored posts (like this one!) in order to pay the bill. To top it all off the bedding I had brought last Christmas already looked several years old and I thought that it would be a good idea to buy more childrens bedding so that we would always have some sheets spare, but before I had the chance to do so Big Boy was diagnosed and the night time wetting stopped.

Top Ender was dry at night from the moment she decided she wasn't going to wear nappies any longer, (as was Big Boy really and if it hadn't been for the diabetes I never would have thought about this) but talking to other Mums in the playground I found out that bed wetting is a lot more common than some might think but that it isn't considered to be an issue until the child wetting the bed is over five years old and has at least two incidents a week. Even then some parents are really unsure of what they can do so I thought I'd write a post about what I had learnt with Big Boy's Diabetic nocturnal enuresis (it means wetting the bed at night!).

So first things first, helping the child to not need the toilet in the night.


There are some practical things you can do too.


I've also found out that as tempting as it is you shouldn't take an asleep child to the bathroom, they need to be awake to make sure that they know that they need the toilet and that they can release their bladder safely. It's all part of the brain training that is needed. This makes a lot of sense and I know if either Tops or BB wake up in the night for the toilet that they go to sleep really quickly afterwards so I think that your brain must be working slightly differently at night, but I'm no Doctor.

Despite what people think rewards charts for dry nights aren't a good idea either. The bed wetting isn't something which the children can control, hence the problem of bed wetting in the first place! Reward charts should focus on something that the child can control, going to the toilet before bed, helping to clean up after they have had an accident or maybe even making sure they drink a set amount of water during the day so that they don't need a lot during the evening.

So there you go, that's what I've learnt. Do you have any tips for helping stop night time bed wetting? And how can you stop bed linen fading from all the washing?!