- October 08, 2012
Growing up I, like most children, listened to the music that my parents decided I would listen to because that was the music that they wanted to listen to. I didn't mind though, the music that my parents listened to told stories and I learnt the words and the tunes quickly and would be able to sing and dance along. My parents would tell me stories of the people who sang the songs, things that they had read in newspapers or heard on the news, Celebrity Gossip I guess but it didn't seem like it, it was just glamorous stories of glamorous people. 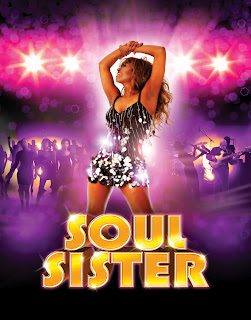 I was originally going to take my Sister to see Soul Sister, as it's a musical following the life of Ike and Tina Turner as their careers really started and their marriage fell apart, but my Mum and I went along, ready to sing along to songs that I had grown up listening to her sing. I was a little worried as whilst I love going to the Theatre, I'm the sort of girl who likes to sit and my seat and be entertained and I had a feeling that this show required the audience to participate, to give the energy that you might get from a Live Gig.

I was right, the audience did need to be awake and ready with the cheers and dancing and clapping and I doubt any of the audience were disappointed with the actors performance as like their singing they really were giving it all they had.

My only criticism was the way in which they showed the passing of time, with images being flashed up on Stage, (it's a pet hate of mine) but I guess that just like the Celebrity Gossip stories from Newspapers I was told as a child these images were just allowing the audience to be able to see the important things happening in the foreground of history whilst keeping the more gossiping angle of the lives of the Turners to the stage.

The show is in Milton Keynes until the 13th October, and if you are in the mood for a feel good musical with songs you will know then pop along and be ready to let your hair down.