- January 27, 2013
I planned this weeks dinners after eating my lunch on Thursday afternoon. I had two Salad wraps (they were delicious!) and discovered that meal planning on an empty stomach (how I normally do it) is so much easier as I know if I am hungry then I'm willing to think about food! Although being full did mean that I didn't want to eat after planning and allowed me to be a bit more creative when it came to lunches this week. 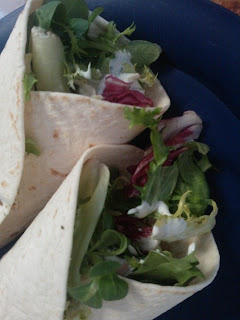 
We are fans of Taco's because we like that you can customise your own food to how you want, it doesn't matter if you want it mild or spicy or with extra salad because when you make your own you get to decide. I'm still pretty certain though that if I showed a Mexican how we make them that they would die laughing at how silly we are over what we do. I have the Taco's in the cupboard already and will buy Mince fresh on the Saturday.


I did end up cooking the roast last week as I wasn't at Church, as I said Daddy was worried that if the snow got bad we'd end up stuck out in the snow and it wasn't a risk he wanted us to take. This week I should have been at Stake Conference but completely forgot and by the time I'd have driven there when I remembered it would have been almost over. I'm doing Slow Roasted Wings with Rosemary Roast Potatoes as I think they'll go well together!


I love the idea of meatless Mondays, not just because of the variety it will offer, or because this one time vegetarian still hankers after a meat free diet (I couldn't do it, I missed sausages too much and also some enzyme in meat stops me having dry skin) but because I think it's important that my family learn that they don't have to eat meat at every meal to make it complete. So this first week of having a meatless meal on a Monday sees us having soup, as I thought I'd ease the family in. I'm going to make bread for the children and I (If Daddy is lucky I might make him some rolls) to have with the soup. I'm planning on making the Jamie Oliver 15 minute Mushroom Soup, as I've heard good things about it for Daddy and I and plain old Tomato Soup for the children as that's what they like the best!


With the BBC Weather Team forecasting a balmy seven degrees for Milton Keynes (it will be balmy after all these minus three's and four's we've been having!) we gone for a lemon pasta dish with Salmon and Prawns for our dinner tonight to get us in the mood for the milder weather. To make this I'll oven bake the Salmon and prawns in a little olive oil and lemon juice, boil the pasta and then make a quick sauce by using the juice from the fish, a little more oil if needed, some chopped basil, some chopped garlic, some very finely chopped spring onions, some chopped dill and season the lot with salt and pepper. I'll then flake the fish and once the pasta is drained mix it all together. It's a nice light dish and a great way to add some fish to the week.


Once every few weeks we go to see Big Boy's Diabetic Care Team, at the local hospital. Whilst it annoys the heck out of me that he misses School to go to the appointments (why not have before/after school appointments every day of the week seeing as all the patients who attend are School aged children), it's also reassuring to know that Big Boy is well looked after and that we can make the necessary adjustments to his ratios to make sure that Big Boy stays well. As Big Boy hates the appointments (he gets prodded and pricked, weighed and measured and then talked about) he has chosen Mum and Dad McDonalds for dinner tonight. I make Chicken Nuggets and chips and then he and Tops "drive" their cars through a drive through in the living room before collecting their food at the kitchen. It's a little bit of fun that we don't mind having! I'll be having a Chicken Salad though.


Dinner tonight is for Daddy really, he wanted a repeat of the curry we had last Saturday as he really enjoyed it. As it is rather spicy, because that's what Daddy likes, I'm making a milder Sausage curry for the children in the slow cooker and will make enough to do at least one more dinner for all of us in the next few weeks. As it is Sausages that the children are having they are more likely to eat the meal as they still aren't spicy food fans even if it is mild compared to other dishes.


I remembered this last week when I used the picture, we love Baked Sloppy Joes and it seems like a while since we last had it. I think this is great Friday night food to watch with a movie because it's relaxed and casual food, which describes our Friday Nights! The film this week is Arrietty, which we haven't watched yet even though we've had it since it was released on DVD

And there you go, that's our dinner this week. Not too bad if I do say so myself. What have you got this week?