- January 27, 2013
Despite having a million billion TV Channels (okay, so maybe not that many my husband reliable informs me that there are around 300 here in the UK) the other night saw Daddy and I watching the final of Adam Richman's Best Sandwich in America. We cracked up that we were watching it, until we started drooling over the sandwiches. Some of them were stunning creations, with flavours we would never thought of combining and others were dishes that we had heard of several times but never knew what went into making them. It gave me an idea, every Saturday we'd try a new sandwich some from the TV show, others from websites or magazines that I'd found but it would mean that we'd be planning our weekend lunches to!


I know this isn't the correct method, but it's how I made it based on what I saw on the TV Show and what I saw on various websites. Take some Steak, cook it on the griddle along with some chopped slices mushrooms and some chopped onions and then when it's cooked place some American Cheese on top so that it melts in. Serve to willing family members. 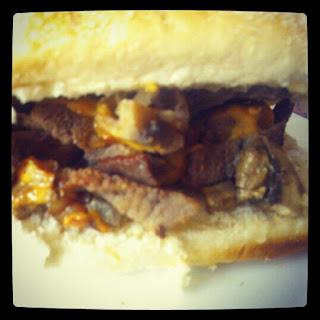 Tops said it tasted like a cheese burger (I could see what she means), Daddy said it tasted really nice and I could see people being addicted to the cheesy meaty mixture as it was like a great comfort food. Big Boy declined it and had a ham roll instead... poor boy didn't know what he missed out on!

Sunday - Salad Wraps (minus the salad for the children)


I love Salad, I really do, I find it very filling and as I've thrown myself back into going to the gym and losing weight I figured that the rest of the family should see what they are missing. As it's important that Big Boy eats his food quickly after he's had his insulin injection he won't have a lot of salad (I'll sneak a couple of small bits in) but Top Ender will have more as she has to get used to it.

I managed to find some gluten free wraps in Asda (they've been sold out for ages) and despite them being terrible for folding in half (as the instructions tell you to) Daddy had left over Taco meat with cheese and Mayola (no egg mayonnaise) as we decided that hot salad just wasn't as tasty as cold salad!

Monday - Sausages (Cheese Salad for me)


Ages ago, Top Ender had some sausages with some ketchup for lunch. Big Boy was looking at the photographs of past lunches and asked if I could give them that for lunch one day, so that's what they have today!


I was talking to my sister about foods that you associate with family members and she says that Bagels remind her of me because after I came back from America in the mid 1990's it was all I ate. I don't remember that being all I ate, but I do remember that bagels are lush. Ham for the children, and a prawn salad bagel for me.


The mini pittas are a favourite in our house, because they are small child hand sized and to easy to fill. I'm hard boiling two eggs and then chopping them with a bit of chives or dill and some chopped tomato as I think the food needs a bit of colour. My lunch will be boiled egg and salad but no pitta bread.

Thursday - Salmon Sushi (Salmon and Salad wrap for me)


Today was going to be a plain boring sandwich, but I thought I'd make some Salmon Sushi for the children. This is where you use a rolling pin to flatten a piece of bread, (after having removed the crusts) and then put your filling on the slice of bread and gently roll it up before cutting it in to a few pieces to look like Sushi. Salmon and Cucumber Sushi will be nice right?


The lovely calender that my SMIL made for me this past Christmas informs me that today is Robinson Crusoe day. I read the book a long time ago and the only food I remember being mentioned in the book was goat, barley, raisins and well, human! I don't think that the children would be too impressed with goat or human sandwiches though so I may have to come up with another idea. If you want to celebrate today, then last year Chris came up with some great ideas which are great for all ages.

Just in case you were wondering, Daddy takes care of his own lunches Monday through Friday as he has some bits and pieces at work (Baked Beans, Bacon, Bread, Cheese, Jam, Crackers and other bits and pieces) although if we have a lot of leftovers he does sometimes take those.