- October 12, 2014
I love having fun with the children, I'm a big kid at heart and so when they get a new toy, I'm just as excited as they are to get it out of the packaging and to have a go. When the new BoomCo Rapid Madness Blaster arrived it took all my self restraint not to open the packaging up and have a go myself straight away!

The blaster is HUGE, I didn't expect it to be quite so big and it certainly feels you're getting more for your money because of its size. Here's a picture of Big Boy, holding the blaster, see what I mean? It's almost bigger than he is! 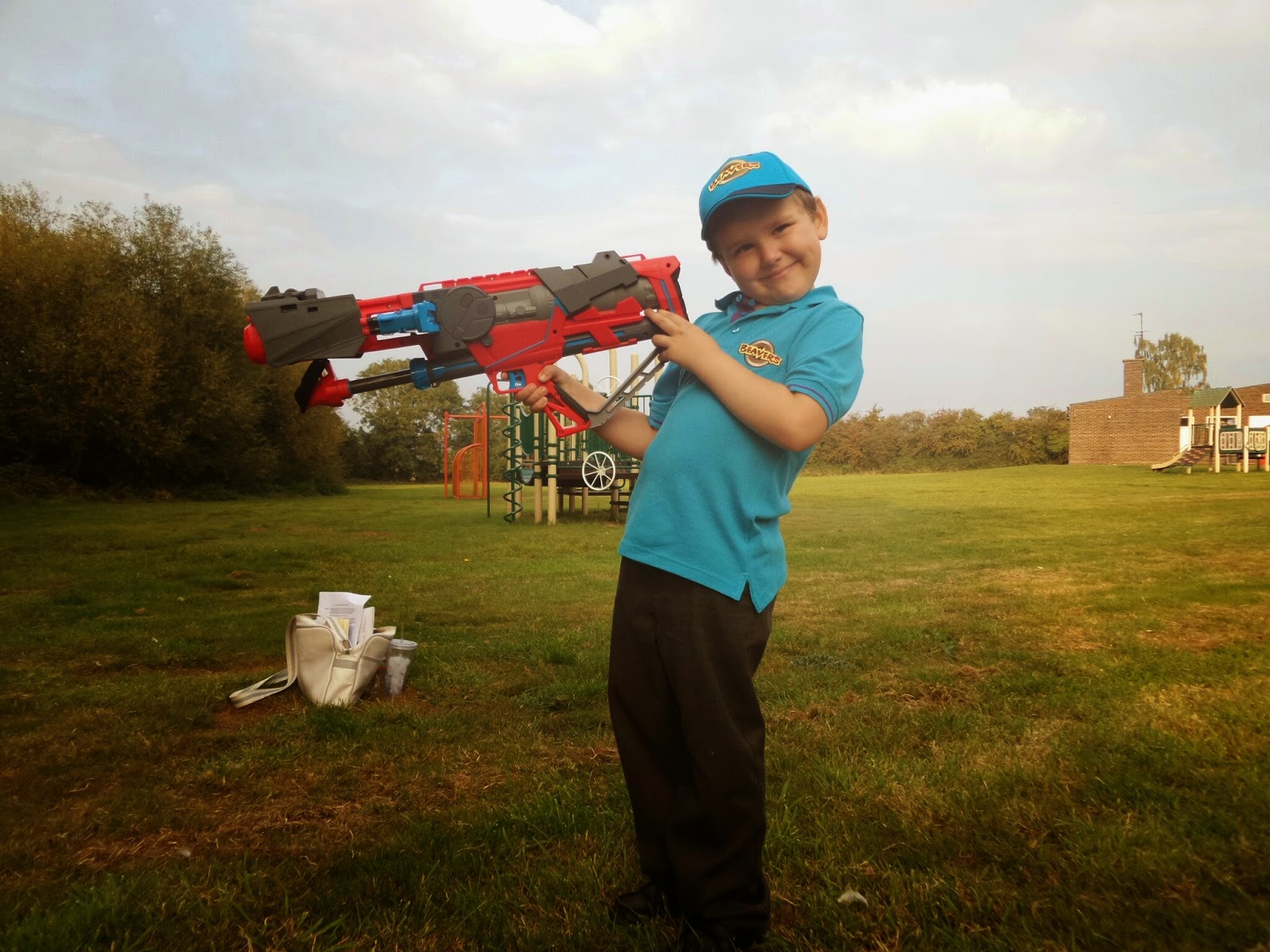 Top Ender and I had a play whilst Big Boy was at Beavers, we had so much fun together and took turns to be the one who collected the darts and who fired the blaster. I have to say that I was better than Top Ender, but I think that it just comes from experience I have from my age, rather than from anything to do with Top Enders lack of skill. Even on the first few goes, she got better as she learnt the little quirks of the blaster, and how best to hold it for her etc. 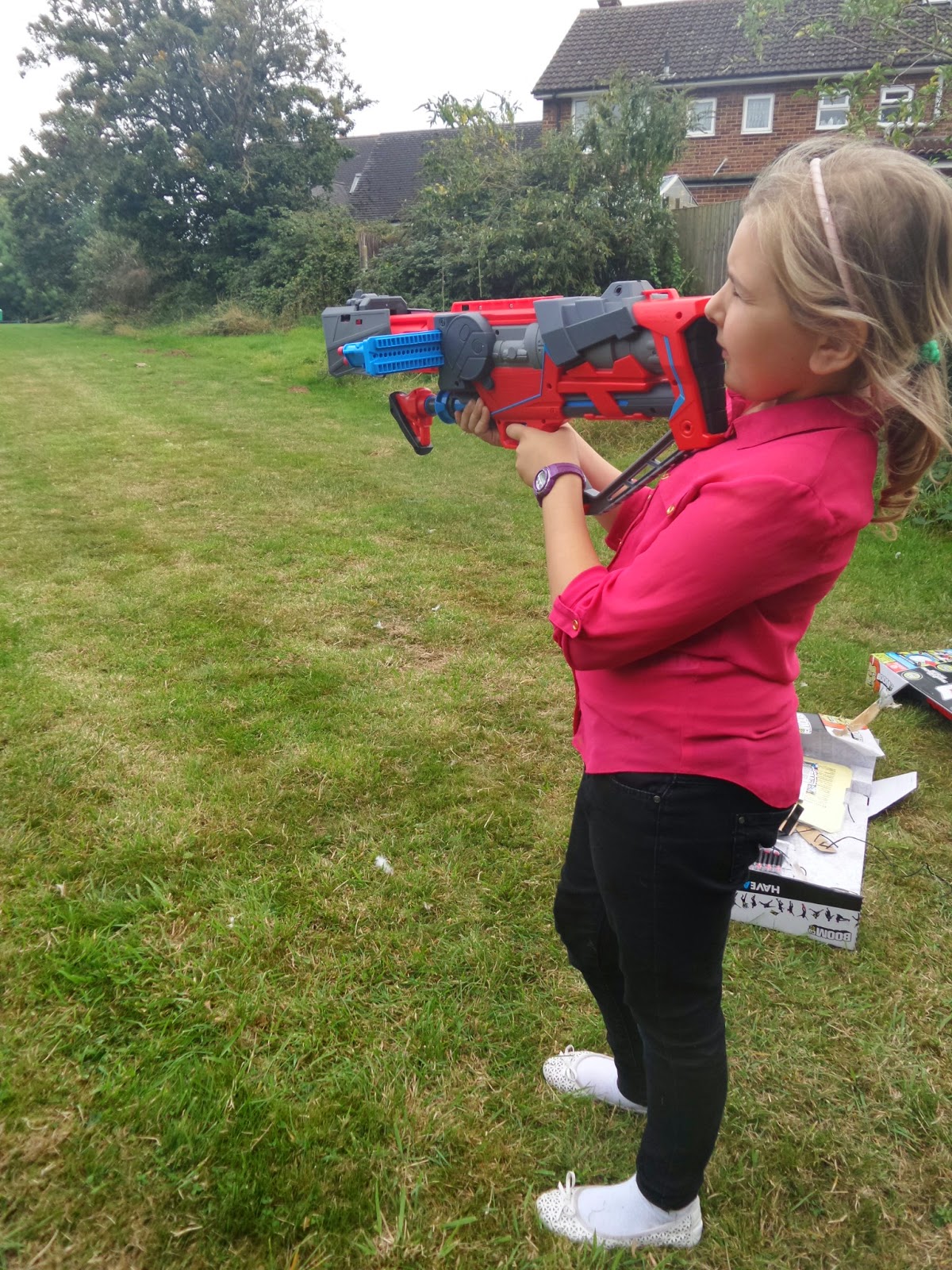 For the hour we played with the toy, we had a blast (pun not really intended!) and we were equally excited to hunt out the darts as we were to fire the blaster. We took so many pictures and video that first night and on subsequent uses of the blaster, I wouldn't be surprised if Top Ender's instagram feed becomes a rival to Boom Co's instagram feed in the near future, although I'm not too sure she'll be able to stop putting up pictures of the Cats or her latest outfit. Anyway our video of Top Ender and I playing with the blaster wouldn't upload so if you want to see some footage check out the BoomCo Youtube channel as it is full of great videos that BB has taken to watching when he gets home from School.

When Big Boy came out of Beavers, he came to play too and of course all the boys at Beavers were very interested in the blaster too. The blaster is really aimed at children aged 7 up, and I think that it is partly due to the size, but also because you have to be able to pump the blaster in order to fire the darts and of course be able to hold it steady at the same time. Ten year old Top Ender had a little bit of trouble with the blaster, but maybe that is just my wishful thinking as I want the blaster all to myself!

The blaster is available now and has an RRP of £49.99, although I found it cheaper at Toys R Us, who are offering their lay away for Christmas service again this year, at Smyths Toys (which is soon to open in Milton Keynes) and of course it's available at Argos too. I'm sure if you hunt around you will find it in a store near you or from a retailer you trust.

I also just want to share this video of vlogger Devin Supertramp playing Capture the Flag with the blaster and other BoomCo toys. It just shows that it isn't just children that love playing with the blaster and again proves that we could, if we wanted have an adults battle... Shall we organise it for New Years Day to blow out the cobwebs from Christmas?


We were sent the blaster to review.
Christmas Review Toys