Camping in Kent with Daddy and Top Ender - Day 3

- August 05, 2015
Hello, Daddy here again with the latest instalment in our camping diary, made possible by the presence of an iPad and great 3G signal!

After a disturbed night which featured an almighty crash and bang, screeching of tyres and then an hour of emergency service sirens (no we haven't found out what it was yet), we emerged from the tent at the rather pleasant hour of 8am to a third day of glorious sunshine and clear blue skies.

Our campsite is only a stones throw from Canterbury centre, so a quick breakfast and short drive later, we were at Canterbury Cathedral, free child voucher in hand, to be one of the first visitors through the doors. I have visited before when I was Top Ender's age - but I don't remember it, well hardly at all. 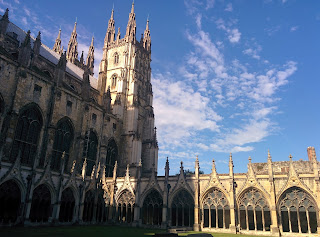 The Cathedral is cavernous inside and, save for some occasional ropes blocking the red carpets, most of the building is open to explore at your leisure. At opening time we stood reverently while they read The Lords Prayer over the tannoy, before exploring as much as we felt we wanted to and all in around 90 minutes. 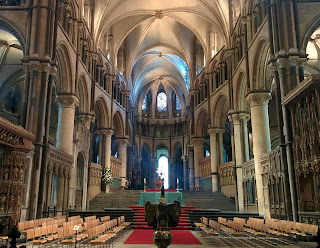 After accidentally meeting the Dean of Canterbury (well, passing in a corridor) and walking through the middle of a documentary film shoot, it was time for an early lunch in the car before setting off to the south of Kent to visit Port Lympne Animal Reserve.

We chose Port Lympne over any of the other wildlife or animal parks in the county, as it offers a Truck Safari at no extra cost. On a site this big, that's a great thing because much of the reserve is otherwise out of bounds on foot. 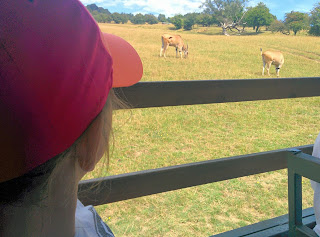 Sadly, due as much to the size of the site and the hot weather, there were decidedly fewer animals to see than the combined £31 entrance fee would suggest you might encounter. A few Giraffes, a distant lone Elephant, a lot of Deer - all pass by in a flash on the Safari part. On foot, the only animals we could get close to (discounting Wasps everywhere) were the Lions and Gorillas - great up close but otherwise the visit was mildly disappointing. 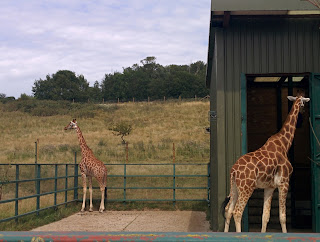 Running ahead of schedule gave us the chance to finish the afternoon as we have every day this week - yes, back in Margate again - at this rate we'll be asked to pay Council Tax! It was hotter than yesterday but the beach was quieter, so we had plenty of space to splash in the sea and collect shells before buying some Rock and spending a few 2p pieces in the arcade.

Top Ender, perhaps fresh from the Cathedral visit, insisted she could walk on water, but I think I figured out how she did it... 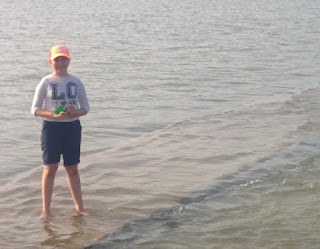 To round off the day we headed to Herne Bay for Gluten Free fish and chips at Shakey Shakey as recommended by TripAdvisor. Note to anyone planning a visit - ask for a small portion! Whilst in town we tried, unsuccessfully, to locate a couple of Geocaches - we had no luck, but it was a fun end to another great day. It was great to check in with Mummy and Big Boy at this point, to share stories of our different adventures today, as they also went to the beach, albeit in a Shopping Centre! 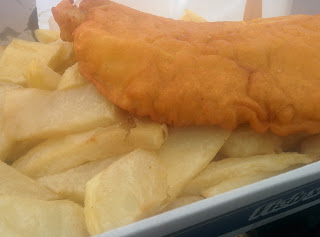 We head home tomorrow, but we still plan to pack in a few activities (once we pack away the tent), so one more update to come. Sleep well!
Camping Paid Day Out Summer