Camping With The Children

- August 21, 2015
The first day of our Camping Trip started with a mixture of nerves and excitement. The Children were excited and I was nervous. The Children couldn't understand why I was nervous, even when I explained that it was just because this was the first time I was doing something alone, well with them of course, but without Daddy. I mean I was a Child and then I was married, I moved from my Mother and Father helping me make choices to being a Wife and my Husband helping me make choices. I've never really been just me now I come to think of it.

After a prayer for a good journey  the Children and I set off on our adventure a few minutes later than we had planned, mainly because I was trying to hit my Swagbuck target for the day before we went, but that's another story. We made good time, chatting for the first hour of our journey, listening to and singing along to Top Ender's mix CD for the second hour, trying to work out which lane of traffic was moving faster for the third hour and of course a mixture of sighing, chanting about how much we needed a wee and trying to find our camp site for the fourth hour. 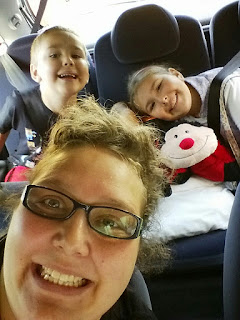 And then we were there.

Now, as I have publicly said several times I am NOT a fan of camping, therefore I have no experience in finding a good camping spot. I had decided before hand that what I needed was a flat bit of ground, near an edge and most importantly nearish the toilets. So I picked an area of the site that I liked and as I had already paid, started pitching the tent.

An hour later the tent was up and we were eating lunch. A quick trip to a local Tesco because we couldn't get one of our Air Beds to inflate and then the Children were off into the Woods exploring and adventuring and having fun, just as I hoped that they would. I spent the time cooking a meal for the Children and I and eventually when they returned (just at the point that I was getting worried) we sat down together and ate. 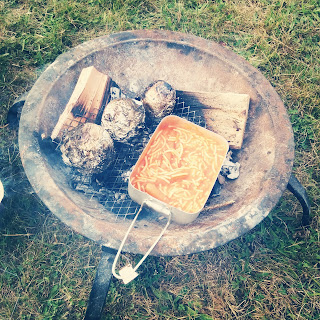 It was amazing. Never has Tinned Spaghetti, Jacket Potatoes and Sausages tasted so good.

We toasted a few Marshmallows and then the Children decided it was time to turn in. Top Ender spent her evening reading, BB played on his tablet and I sat watching the Children, reading, writing and just being amazed at how fabulous the Children were being.  Around 10pm all the other campers started putting out their fires and turning in for the night and I sat watching the fire, listening to the silence of the countryside and trying to see the stars. 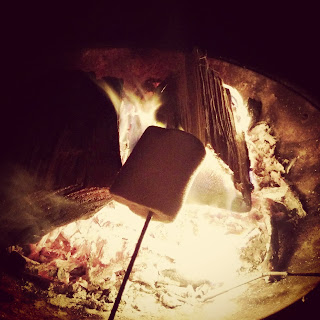 It was the perfect first day of our camping trip, with all the essentials of a romanticised camping trip. Toasted marshmallows over a camp fire, good books, star gazing, the Children running free and a whole lot of love.
Camping Family Life Holiday Summer