- August 05, 2015
Big Boy has been after a Wii U Pro Controller for a few weeks now. I'd agreed that I'd buy him one but I hadn't yet got round to doing it. He was being absolutely fabulous and so I decided that I really had to buy one for him, a quick look online and I could get one for him delivered in the next few hours. Same day delivery? PERFECT, I could make myself seem Super Awesome...

MUM! I think our delivery is here! I just heard a van!

BB and I peek out the window.

A van has parked across our driveway, blocking not only our drive but our neighbours too. On the far side of the van three people get out the van. We can tell this as we see the pairs of feet under the van. They are all wearing black steel toe cap style boots and black trousers, that's all we can see.

BB and I look at each other.

BB says. If it isn't our delivery we're about to be burgled.

They look menacing and in the split second this occurs, I'm seriously considering how to get BB out of the house, knowing the only exit is through fence panels into various neighbours gardens and the fire route we've planned out the house if we're in bed is probably the best route for him to go alone.

The third man walks around the van and starts down our driveway. He's normal sized. He looks normal. Actually scratch that he looks young and weak...

I could probably take him in a fight I say to BB, who nods once in agreement.

The young normal one rings the doorbell. I move from where BB and I are hidden from view from the outside of the house, but still gives us a good view of everything going on outside the house.

I open the door, suddenly aware that I am only in my PJ's and yes they do look like Yoga wear, but I'm IN MY PJ'S AND ABOUT TO FIGHT A BURGLAR!

The man smiles. Hello Mrs Wright, I have a delivery for you. Could you sign here?

I take the parcel, I take the pen and form I've been asked to sign. A quick glance to check that I'm not agreeing to something strange or scary or anything other than agreeing that I've had my parcel delivered.

Have a good day Mrs Wright! the man says as he walks back up the driveway where the other two men are still waiting, arms folded, serious expressions (scowls really) on their faces.

I quickly close the front door.

Phew that was close says BB. Now, can I have that parcel? 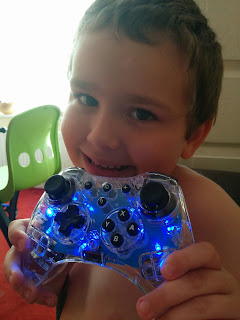