Camping With The Children - Day Two

- August 21, 2015
The second day of Camping started with me slightly panicking after someone shone a torch in our tent. It was only a few minutes after I'd got into bed and the Children were both semi awake, which of course as soon as the torch shone into our Tent meant they were both wide awake. I told the Children a story and they went back to sleep, leaving me laying in the tent not feeling sleepy! I was just dozing off when suddenly there was a really weird noise outside the tent. It was like a Screech, the sort of noise you would hear if a Murderer wanted to freak you out before using his knife to tear before open the canvas of your tent and then skin you alive so he could wear you like a coat.

And I'd make a great coat.

Sleep eventually came to me, and despite hearing the noise several times more luckily the Murderer did not make an appearance.

Then, the Sun rose and I woke up thanks to my sleep mask having fallen off and me slowly realising that I was rather cold and by rather cold I mean actually I was FREEZING. I was tempted to get dressed in my sleeping bag, but in the end just froze getting dressed in the middle of the tent and then sat outside the Tent, watching the Sun rise over the trees. 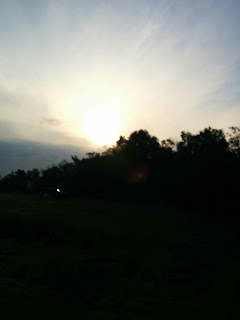 Then I had to wait for the Children to wake up.

Eventually they did and they got dressed in their sleeping bags before having breakfast and then heading off into the Woods again. When they got back, I'd sorted out the Tent, refilled our water bottles, made lunch, packed our Cooler and had even been for a quick walk around the camp site.

We headed off to Monkey World and got there for 10am, which is just when the attraction opened. 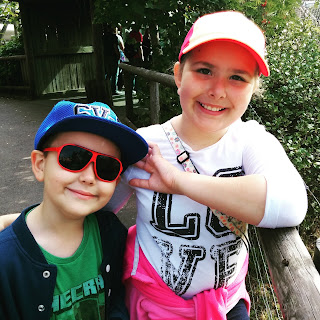 I paid for my Single Parent Family entrance (One parent, two children) and we headed off into the park. A word of advice, in the future if you visit the attraction get there for opening, it gets busy quickly but see my review next week for more details.

After visiting all the enclosures and spending some time at the Playground we realised we'd been there for three hours and so we had some lunch! It was at one of the enclosures, that we heard the strange Screeching murderer noise again. I'd been so stupid and had forgotten that our Camp Site practically backed on to the Monkey World site and it was one of the residents I'd heard several times throughout the night!

After a quick trip to the ice cream stand and gift shop, we left to go back to our tent to pick up our Beach toys and Swimming Costumes. We drove to Swanage, which Daddy assured me I'd been to before, found a parking space (which I parallel parked in!) and headed down to the Beach. It was a bit overcast and the beach had a few die hard British Families on it and the Children and I found a space, set ourselves up a camp before they ran off to the Sea for a paddle. 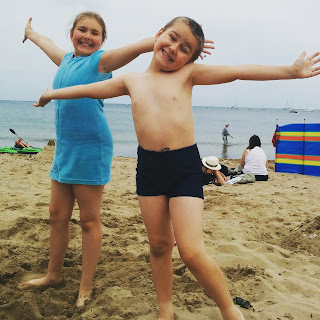 The Children spent ages playing whilst I watched them and then Big Boy and I had a Sandcastle building competition, whilst Tops had a swim in the sea. Eventually Tops came back and helped BB build his Sandcastle and had a dig in the Sand herself.

Of course it wasn't long before other families started to drift away back to their holiday homes, hotels and probably even tents and the Children made the most of this by heading back into the Sea. I gave them an hour, imagining hat they'd be bored well before then, but they really loved the splashing and paddling and it was all I could do to get them dried and changed into warmer clothes than the shorts they were originally wearing  when it was getting rather late and most certainly time for our evening meal! After putting everything back into the car we headed off to find a Fish and Chip shop, which seeing as how we were in a Seaside resort we soon stumbled upon. 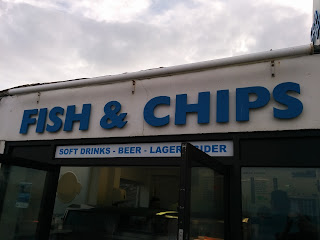 We sat outside the Chip Shop looking out to sea with our Fish and Chips supper before catching up with Daddy and eventually heading back to our tent. Two very exhausted children, changed into pyjamas without being asked and BB declined a Marshmallow, so Top Ender and I sat watching the flames in the fire pit, before heading to bed ourselves.

There had been no arguments or bickering during the day, we'd had fun together and we were due to go home the next day and hopefully before it rained too... I have to say that maybe Camping isn't so bad after all.
Camping Family Life Summer