Some Cartoon Fun And A Competition! #Spon

- September 15, 2015
Big Boy and I get home at least a whole thirty minutes before Top Ender now that she has gone to Senior School. Once we've completed a blood test, put away the bits from his lunchbox, been to the bathroom, read BB's latest reading book and updated his Home Contact book we look for something to do. Some nights we watch funny videos on Youtube, some nights we play a quick game on the Wii, some nights we just play and something we're loving is this Create an Ultimate Super Hero site! Want to see me as a Super Hero?

Who am I kidding of course you do. BTW, I have an assumed identity so that no bad guys can track me down! 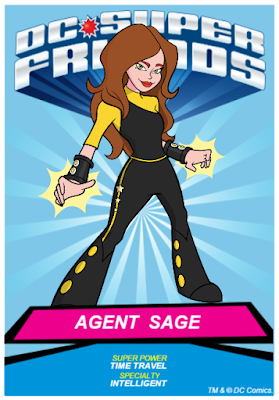 They have some great videos too, classic favourites such as Scooby Doo and Batman. They have promised there will be many more updates over the next year, so don't forget to subscribe to their channels both DCKids Channel and WBKids Channel.

Also, I was alerted to a fab competition running at the moment, where you guys can enter to win a pretty fantastic toy gift basket, I'm embedding the entry here for ease, but I'm not the one hosting the competition, so make sure you read the T&C's!

Now, are you a Batman Unlimited or

I think that I'm a Scooby Fan... no Batman... no Scooby... Het has there ever been a Scooby and Batman crossover?! That would be the best cartoon ever!

This was a sponsored post, however if you happen to win the Titans Team Tower, would you give it to me? I'm a big fan.
Sponsored Post