- September 30, 2015
It's no secret in our family that despite having lived in our house for err... nearly nine years that I don't think that the house is my home. There are a few reasons as to why, but Daddy thinks that it is mostly to do with the state of decoration. For example, everyone knows that I HATE my bathroom, the tiles are beyond terrible as is the layout, the actual suite itself and it is really, really high on my list of things to replace. I mean seriously, it's first on the list and it's going to be replaced... it's just it's a big job and it's our only bathroom and it's so much money.

It's nice, it's unfortunately dated to the early 2000's because of the whole Red Statement Wall thing that was popular then, but you know. I can cope with four of my neighbours having the same colour scheme in their living room as me...

When I got an idea about how to decorate my hallway my husband was understandably excited. This was me showing an interest in making our house a home.

Plus our hallway really needs decorating.

I had decided that I wanted a brown in the hallway, mainly because of the stains on the wall by our bathroom door, where little fingers touch the wall whilst opening the bathroom door. We looked through a few colour samples and decided on two that we liked. One mainly because of the name (Chocolate Milkshake) and one because the colour was closest to a colour that I imagined (Oatmeal) the hallway being painted. The problem for me was that the names are the wrong way round!

So, here are the colour samples. 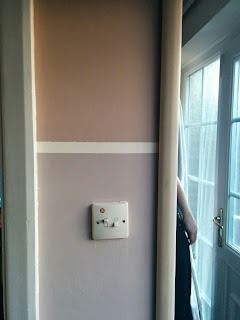 Yeah, we like the top one too. The bottom one (with the best name) is just too pale and so we're picking the top one and I'm going to pretend that it is called Chocolate Milkshake!

There are a few more touches that I'm going to make, a couple of different stickers that I like that I'd like to put on the walls, a change of carpet (I'm thinking a Berber type), anyone any other ideas? I love the idea of having painted stairs with a runner down the middle and a matching carpet on the landing and the hallway floor... then again I also love the idea of having a really funky carpet... I just need to do some Pinning!

As I'd also like to put up a new bannister and change the front door but the latter is never going to happen!) and of course once this is all done I may have to reevaluate the artwork on the stairs and of course the lampshades!

And so, that's the plan for before Christmas. I'm sure Santa will approve of the new colouring scheme... and if not TOUGH, he doesn't live here!
Family Life Home Improvements Making A House A Home