- September 21, 2015
There are dozens of things that I hate, but the thing that I hate the most is feeling helpless and not being in control. Normally I avoid situations where this happens, or I research a situation to the point of being able to not feel helpless or to give myself a sense of control. This past weekend however I found myself in a situation where I was completely helpless and everything felt out of my control.

I had a flat tyre.

Now, this actually wasn't the first time that this had happened. I have actually had a flat tyre before, and I successfully managed to replace the said tyre.

I didn't have, two children in the car along with my Mum, and two households worth of shopping in the boot. I also didn't have a spare tyre in a cage under the car. 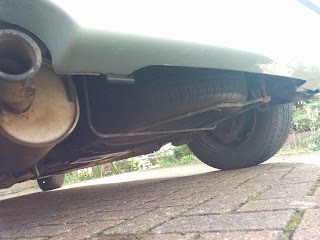 And to top it all off I was really really annoyed with myself.

I called my husband, he is almost always my first port of call. Sod that he was in Amsterdam! I asked if we were covered for this with our Breakdown Cover, he said we were but he and I both knew I could do this myself.

We unloaded the car of all the Groceries. I was very aware however that they were now in the sun and so wanted to get things done fast. The children were put back in the car, and somehow Top Ender knew to keep BB occupied so that they weren't annoying me. I think the look of pure anger on my face was the decider. Out came the travel games and they sat quietly playing.

My Mum stood by me at the rear of the car, knowing that I was fuming but wanting to help. Eventually I managed to get the spare tyre out... You have to unscrew that little bolt down there and then it sort of drops a cage under the car. 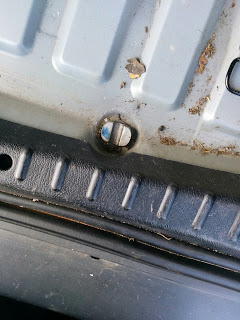 I just couldn't work out when the cage had dropped, eventually I just looked underneath and unhooked the cage. Then I couldn't work out how to use the jack. I was just about to call the Cavalry when a Man suddenly appeared and started changing my tyre for me.

I loved that man right there and then.

He quickly and efficiently changed the tyre, helped me put the other tyre back under the car and even his wife joined us for a chat whilst we stood around watching a stranger rescue a stranger. The man said he hoped that if his wife had the same issue that someone would help her.

And suddenly it was all better.

The man had changed my tyre. I didn't even get his name. 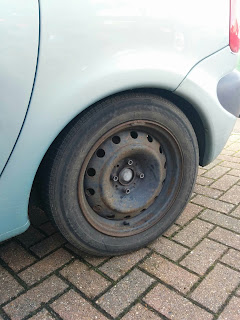 The man went off with his wife thankful that he had completed his good task for the day and I was able to return home with the Children and my Mum.

And now, I'm looking for a course in basic mechanic skills... I figure it is the least I can do to make sure I'm safe on the Road!
Family Life