The First Week Of September (and a bit of August, but Sssh!)

- September 12, 2015
It's funny, over the Summer Holidays we did so much together as a family but I felt that summarizing it each week was just a repeat of the same thing. We got up, we read, we wrote, we tidied up, we played, we exercised, we ate.

Every day the same thing.

And, I fell out of the habit of doing these weekly blog posts that actually I really love doing, but I want to get back into it. I want to have something worth writing about, something different other than, we got up, we read, we wrote, we tidied up... And now of course we are here back at School and ready for a new year, a new challenge and hopefully I can write more... I said hopefully!

So, here is The first week of September, and the last few days of August.

The First Week of September


The last few days of August, saw Top Ender, Big Boy and I hanging out at home. Daddy of course had the Bank Holiday Monday off and we spent most of the day doing things that we thought that the Children would like to do with us. We went Swimming, we ate junk food, we played Video games, we coloured, we watched a movie, we played Scalextric. We wanted to make sure that we were relaxed and ready for the return to School, but also we wanted to make sure that the Children knew that we were here for them. That as always we were on their side. 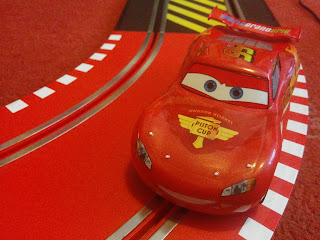 The next couple of days had BB, Tops and I running around doing those last minute things that always seem to be last minute despite all the forward planning.

On Wednesday we were at the Hospital for a Diabetic Clinic appointment for BB. I ended up speaking for ages with the Dietician, as I've already mentioned on our weekly food post and we've sort of refined our diet so that we're now eating uber-healthily. 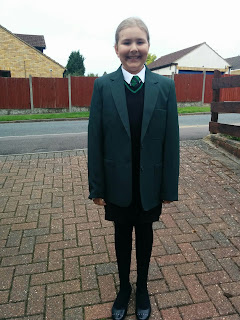 Daddy spent the day at home, he thought it important that he be around for Top Ender, plus it's a big step for us. Top Ender is our first born and now we're old, because our daughter is old enough to be in Senior School.

Actually, scratch that sob, I got Daddy to help me clear out a Kitchen cupboard or two so it was really rather lovely having him at home!

Top Ender loved her day at School however and I think it more than fair to say she loved her second, third, fourth, fifth... well however many we are up to she is still loving School. Loving the independence of walking to and from School without me and Big Boy but with her friends or alone.

Friday was Big Boy's first day back at School. I'm so lucky, because both my Children love School and so he was eager to go despite it being only one day before the weekend! 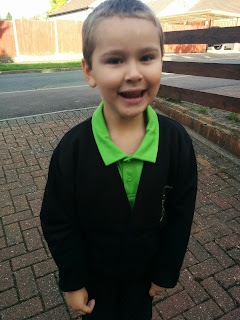 On the Saturday, Top Ender and I attended a Baptism of one of the little girls in Primary. She's such a sweet little girl, and I was so pleased to be able to celebrate with her and her family. If you are the praying sort, I'd really appreciate if you could say one (or twenty) for the little girls Grandad. He is one of the kindest and interesting men I know and he's very poorly with Cancer. I hate that C word more than anything.

The rest of the day was spent with us going shopping with my Mum and then Top Ender and I watched a movie together. Sunday, the Children, Daddy and I went out for a walk before Tops and I disappeared off to Church. It was really lovely, but not as lovely as the meal that Daddy cooked for us when we got home!

Now, I know I said that I didn't want to say things were the same everyday, but they were for the most part on Monday and Tuesday. Apart from on Tuesday I tidied up a tonne of crud that had accumulated in the house and ended up clearing the top of the Fridge and Freezer and a few other places in the Kitchen.

It was strangely satisfying.

Wednesday I had an appointment with the SENCO at School. She was BB's teacher last year and Top Ender's the year before and she is amazing. I honestly think I love her, she has done so much for both my Children that I could never repay her.

Before the meeting I had cleared out two cupboards (double cupboards) and removed a lot of cups, pots, plates and general junk that somehow made it's way into the cupboards. It was really cathartic and I keep taking pictures of my tidy cupboards... Is that normal?! 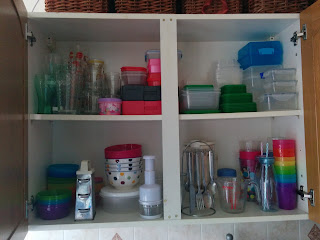 The rest of the afternoon I got ready for some fun with the Children after School, but we ended up having the fun on Friday instead. On the Wednesday night we watched a movie and Daddy went out to see a show. It was actually a great night, but the best part for me was the shower at 9:30pm that was just the most amazing!

Thursday had us all back at our After School Activities, and things seemed a bit of a blur. Tops came with me whilst BB was at Beavers, and we went Blackberry picking. It was worth it, as we froze some berries for eating with Breakfast and Snacking on during the Autumn and we put some to one side for Breakfast on Friday morning.

I'm pretty sure that BB and Tops were exhausted at the end of the night, as they fell asleep in record time! This was of course, after BB had two tiny meltdowns. A combination of low blood sugar and a first week back at School. For the first few weeks back at School and our after School activities I think that Thursday nights might be my favourite night...

Friday had me saying goodbye to Daddy as he was off to Amsterdam for some kind of conference. After School, BB and I went to the Park and Top Ender met us there. We walked home together after a little while and then BB spent most of the evening playing on the Wii U on his new Super Mario Maker. Tops spent most of the evening working on her PC, although we had a good chat together. I think that both Children needed it, especially because it seemed to just allow them time to decompress and I found out a tonne about how they were feeling and what they were thinking about whilst eating our evening meal.

And so that was the First Week of September (and a bit of August too!). What have you been up to?
Family Life School Summer