Dan Jon Jr and The Three Bears of Baptism

- October 25, 2016
I mentioned in my post on Monday that I gave a talk at Dan Jon Jr's baptism. Dan Jon had asked Top Ender to talk about the gift of the Holy Ghost, which gave me the opportunity to talk about Baptism.

The problem, well I think it was a problem, was that Dan Jon Jr has been learning about Baptism in more detail for weeks, months even. We thought that there was no point in agreeing to be Baptised if you didn't know all about it!

So I wanted to talk to Dan Jon about Baptism, sort of recapping what he already knew but with a twist. A twist suited to him, suited to Children and suited to our quirky family (and friends who would join us and be listening to the talks too!).

I had a half idea in my head from a talk I had read years ago, probably when Top Ender was being baptised a couple of years ago, and so I went searching for a more filled out version of this idea and from there I wrote a talk, the highlights of which I'm including below. 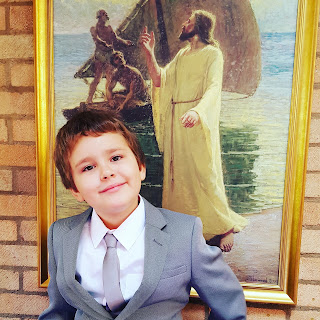 Now, today for my talk, I’m going to tell you a little bit about three bears. No, not the bears from the Goldilocks story, but the three bears of baptism. They are explained in Mosiah in chapter18, verses 8-10.

Now, the bears mentioned in this chapter can help us remember the covenants, which as we know is a special word for a promise, which we make with Heavenly Father when we are baptised.

The first BEAR (I paused to put a bear up on to the pulpit) of baptism is to bear HIS name. Do you remember when we talked about our Family Trees and how you have most terrible surname in the world because you have to be at the end of every line?

By being baptised today, you’ll take on the name of Christ and become an official member of his church. You will try to do things that Jesus would do because you’ll also take upon you Jesus’ name.

The second BEAR (I paused to put up a second bear on to the pulpit) of baptism is to bear testimony, or to bear witness and share with others that we know Jesus is the Son of God.

You and I know that Jesus is our Saviour and we know His gospel is true right? Well, once you are baptised you become an example of that knowledge.

You must try to always remember him in your thoughts, in your actions and with the example you set to all those around you. It can be hard, but I know you will do a brilliant job.

The third BEAR of baptism (I paused to put up a third bear on to the pulpit) is that we bear one another's burdens, that they may be light.

That means we help each other with the work that needs to be done, be it cleaning the chapel like you helped me do, or chores at home or even doing a job for Mummy or Daddy and yes that does mean if I’ve forgotten my glasses upstairs again and I ask you to run upstairs and get them that you can’t huff and puff about it!

It also means we help others when they have trouble and sorrow so they won't suffer alone. You are already really good at doing this, you give such great hugs that sometimes I forget why I was sad or worried before you hugged me!

You know why this is really great? This is one way we can follow the commandment that Jesus gave us to love one another, exactly the same way that He loves us.

Now, here is an important bit.

Today is your special day, and that’s why you have a new suit and you get some gifts and afterwards we’ll all eat cake together.

Today will only happen once, you only get baptised once.

Sometimes though, even though we try really hard and we've made this promise that we'll be good we make mistakes. Heavenly Father has given us all a chance to renew our Baptismal Covenant every week though, when we take the sacrament. If you listen when the sacrament is being blessed you’ll hear reminders about your new three bears each week!

Remember
You bear his name.
You bear your testimony.
You bear one another's burdens. 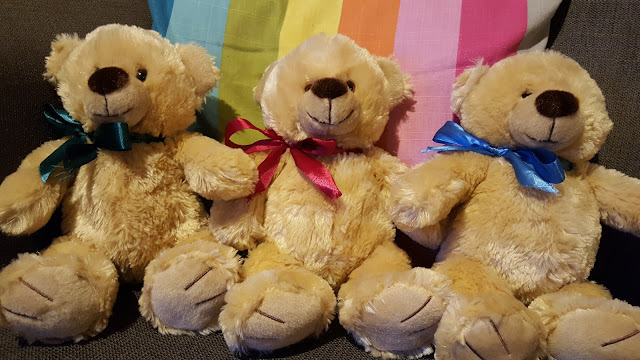 Dan Jon Jr has decided to call his bears, Timothy (Green Ribbon), Blueberry (Blue Ribbon) and Steve (Red Ribbon) and they are living on his bed as reminders of the covenant he made.
Family Life Religion