- October 01, 2016
I think that because I'm cooking a lot from Scratch at the moment that I'm really enjoying cooking again. I think that cooking is a great stress reliever and for me a great way to relax and as I'm also doing something for my family I don't feel like I'm wasting my time by relaxing when there is plenty to be done for me and my family!

With that in mind, here's what I'm cooking this week


I would like to say that we really enjoyed the casserole I had planned a couple of weeks back... but as it turns out we didn't eat it. Instead we snacked and ended up not eating a proper main meal. According to the Weather Man today is going to be a bit rainy and miserable so I thought a Casserole would be a perfect comforting dish.


With it being General Conference this weekend, I'm at home instead of being at Church and so I thought it would be a good idea to remake the Gammon Roast I made a few weeks ago when Flyfour wasn't here. 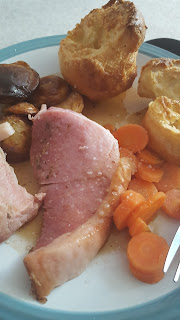 
I was trying to think of something that the Children and I would all love and came up with Gnocchi, which we haven't had for ages.

The only problem of course is Flyfour won't be able to eat it with us because I won't be making the Gnocchi from Scratch, but just making it come out the packet!

Flyfour has said he'll eat from our ample Store Cupboard. Which I think is code for he is having Veggie Quorn Burgers.


I was trying to think of something that would be good for Dan Jon Jr, Top Ender and I to have before we went out to our Faith in God activity (for Dan Jon Jr) and Top Ender went to Young Women's and would still be good for when Flyfour came home.

Then I realised that cold Tuna Rice keeps in the fridge for a few days, so would be absolutely fine for being prepared early on Tuesday morning and then be ready for after School for the Children and I and then for when Flyfour gets home a few hours after that.

Wednesday - Carb Free (Anything but eggs) but certainly some Fish!


I've noticed that Dan Jon Jr's blood sugars are creeping up at certain points during the night and so I want a zero carb night to see what's up. Dan Jon Jr was fine with that, but just said that whatever I made for him shouldn't have eggs because he's sick of them.

I'm not sure how he is sick of them, seeing as we haven't had any for a while but, okay... Hopefully he'll love whatever I come up with, which will have some kind of fish!


Yup, Jacket Potatoes again. They are just so quick and easy to do and you can top them with just about anything! We have bits and pieces in the freezer, fridge and cupboard that we will use to top them... I'm thinking that I'll have a little cheese and mixed veg and have a sneaky feeling that everyone else will opt for Baked Beans!


I thought that Dan Jon Jr and Top Ender might like to make our evening meal today, so they are making home made Chicken Nuggets and chips. I'm also going to get them to do some veg, I'm just not sure what kind yet!

So that is what we are making this week, what are you having?
Family Life Food Main Meal Meal Plan