- October 16, 2016
When Top Ender was going up to Senior School, we knew that she was going to have a lot of homework and so we wanted to create a space for her to do her homework in peace and quiet and after a little rejigging of her bedroom we created some space for a desk. The problem was that Top Ender's desk became a bit of a dumping ground instead of a serene place to work on her homework and Scripture Study.

Luckily Tops got on board with the whole KonMari method and has slowly been working her way through her room and adding pieces to her room that brings her joy... mainly items featuring owls or Kawaii characters. When we were asked if we would like to review some 3D puzzles featuring Owls, which would help Tops keep her desk neat and tidy I was excited. 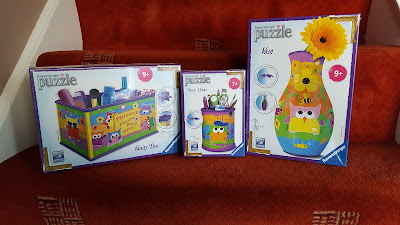 I say I, because Top Ender was worried that the 3D Puzzles were going to be hard to complete, she thought that she wasn't going to know where to place different pieces and was going to end up wanting to throw pieces on the floor..

Luckily the pieces are all numbered on the inside and with a little arrow to indicate where the next piece should be placed and so Top Ender's fears were unfounded. 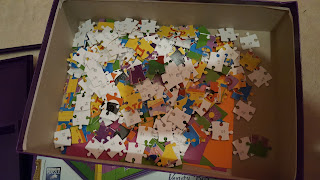 From where I was sat on the floor, I could watch Top Ender work. As she put her pieces into number order (or at least in to a group of ten 1-10, 11-19 etc at my suggestion) I could tell that she was actually enjoying what she was doing and as she sang along to the songs on her ipod, it was more then just a really great way for Tops to relax. 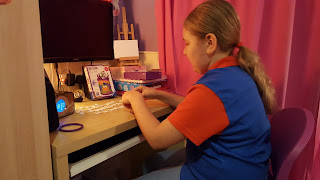 In fact before Top Ender knew it, her pencil holder was completed! 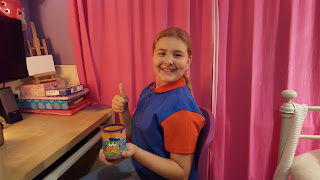 Tops was on a roll and started working on the Vanity Box. By now she had the idea of how to work on the puzzle and finished the 215 piece puzzle super quickly, but unfortunately not fast enough to complete the Vase before she had to go out that evening. 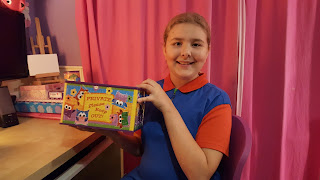 I did want to do the 3D Puzzle Vase for her, but I thought as she had enjoyed the other two so much I didn't want to take the joy away from her. It's a good job I didn't too, because Top Ender got up super early the next morning to complete the 3D Puzzle before she had to go to School. I even sneaked out to buy her a small bouquet of flowers to put into the vase, just to make her room look even prettier! 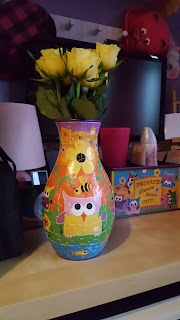 Top has said that the puzzles despite having a young lower age on the box are brilliant for her age and above and that she's thinking about buying herself a few more different items (or maybe the same items in different designs) to complete over the next few months.

I know that they have a Unicorn range, so I guess I'll be adding those and the Jewellery tree to her Christmas Stocking this year!

We were given the three items to review, we really liked them and Top Ender loves them.
Review Toys