- October 04, 2016
Rather like when we watch Studio Ghibli films, watching some programmes on Netflix makes us hungry. We recently watched the documentary series Cooked, and discovered a lot about how communities and cultures have developed around the need of sustenance and sharing the partaking of this food... and boy did it make us hungry. Then Netflix gave us the idea to make some food to eat whilst watching our favourite shows or films, food inspired by what we were watching.

What would we make?

Could I make myself a Key Lime Pie to eat whilst I watched Dexter when the Children had gone to bed or School?

Waffles whilst we watched Waffle Street?

Hot Chocolate whilst watching Once Upon a Time?

In the end Dan Jon Jr decided he was going to make a Fry Up with Flyfour for us to eat whilst we watched Meet The Mormons on General Conference Sunday (2nd October to anyone who isn't a Mormon!). 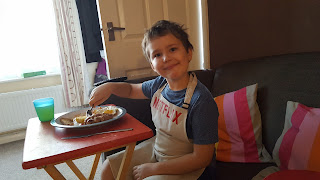 He was so proud of himself that I wanted to do something special too. So I decided to take a leaf out of Lorelai Gilmore's book and make a breakfast designed to appeal to the child in us all! 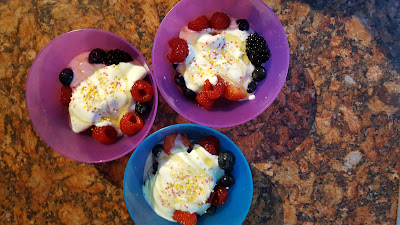 I admit that Lorelai would have probably never have added the Fresh Fruit to her Yogurt, (unless it was an apple and she was pregnant) but I'm sure with Luke's influence she would "allow" the healthy and colourful additions to her bowl.

To make this, all I did was slice and cut up some fruit, add some yogurt, some honey and of course sprinkles because everything that has sprinkles tastes better!

That wasn't enough though... so I made some Bagels. Not just any Bagels however "because what bagel stands a chance next to Sookie’s magical muffins and scones"? (yes that's a quote from Tobin) 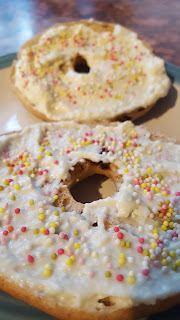 These are seriously simple, you could make it more complicated by making your own bagels, but who has time for that? I mean I know I that I love making bagels, but that's because I have no life...

Anyway. Take your home made or shop purchased bagels and cut them in half (unless you have the pre cut kind in which case, just split them apart!). Now toast, or grill or if you're American broil (Do Canadians say this too?) the bagels.

Whilst that is going on take a tub of Cream Cheese and put it into a mixing bowl. Add to that 50g of Icing Sugar and 2 Tablespoons of Ground Almonds and mix well. If you have a hand mixer use it, if not give your arm muscles a work out!

If the mixture looks a little thick or like it isn't going to spread then feel free to add 1 Tablespoon of milk to loosen the mixture up a bit. Then add 3 Tablespoons of Sprinkles (or three good glugs!) and fold them in so they get nicely distributed amongst the cream cheese mixture.

By now you should have toasted all your bagels and you can slather them with the cream cheese mixture and top with extra Sprinkles if you feel the need.

Luckily both Dan Jon Jr and Top Ender loved the cake tasting cream cheese bagel topping... which is a good job really because I have a tonne left! I have a feeling we'll be eating this with Apple slices this evening after we get back from School!


I'm part of the Netflix StreamTeam, every so often they send me some ideas of things to do with the family. They provided me with a Netflix subscription for a year (which we added to our existing Netflix account) and an ipad mini which was sweet of them!
Breakfast Cakes Family Life Food Netflix