- October 15, 2016
I was on Twitter on Monday night, when I saw a tweet for a Cauliflower Cheese Soup from Chris aka Thinly Spread. I was, at the time STARVING as I'd made the Children their evening meal (soup and toasties) and I was waiting until Flyfour got home before I started on our soup...

Anyway, I decided that as it was such a brilliant soup that I'd add it to the meal plan for the following Monday and whilst I was there I sorted out the whole week too! I even added everything to my online shopping basket and ordered and paid for it, so I could just pick it up on Saturday morning!

Chris I blame my organised week on you!


Last week when we had the Maple Salmon (It was LUSH) I purchased a whole side of Salmon. It was so big that as well as having four generous portions on the Sunday, we had enough for the leftover pizza on the Tuesday AND there was half a side left (that we didn't cook) that I froze for use this week.

This recipe has been on my magnet board for months, I picked it up in some supermarket, and so finally I've got round to making it. Or rather Flyfour will because I'm not sure what time I'll be home!


We're having a munch and mingle at Church today, so we'll eat there with our friends. We'll probably grab something later in the evening however, I think Chicken Burgers all round.


Well, here's the soup that got me thinking about the whole week. The photograph that Chris shared looks AMAZEBALLS, hopefully mine will look just as good and taste as good as it looks and as good as the soup I had last Monday was! 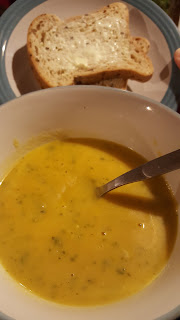 
Yup, a tuna and sweetcorn mix for Jacket Potatoes. I'll offer the Children Salad of course, but I know they'll decline!

Which is fine, because knowing my family as I do, Flyfour will also decline and so it just means all the more for me.


I'm rather excited about tonight's meal because it was the last one I picked. Now that may seem odd, but basically, I worked out all the other meals, you know a couple of veggie meals, a couple of fish meals, a fun meal etc and then was left with just Wednesday.

So I decided that today we'd have Chicken and I wanted it to be a slow cooker recipe... then I found the one I've linked to and a plan was formed! I'm going to make double to allow extra for making Freezer Burritos for next week too,


We really enjoyed the maple glaze on the Salmon so I thought I'd try something a bit different with the Sausages this week and may a traybake with Swede.

I do love a nice bit of Swede.


SCHOOL'S OUT! WHOOP WHOOP! In order to properly celebrate we'll have home made Pizza for our evening meal. I can tell you now that I'll have plain, the children will have a Hawaiian and Flyfour will go for a Pepperoni topping!


So that is what I'm planning for the family to eat this week. What are you having or what have I inspired you to have?
Family Life Food Main Meal Meal Plan