Pityriasis Rosea. Yup, I'd never heard of it before either.

- October 14, 2016
If you read my Facebook pages, both Personal and Blog wise then you may already know all this... so I apologise that I'm repeating myself!

Only by the end of Monday her entire torso was covered in this rash. We gave her some anti-allergy medicine and decided that come Tuesday morning, if she still had the rash, we'd book her an appointment at our Doctors Surgery and get her checked out. 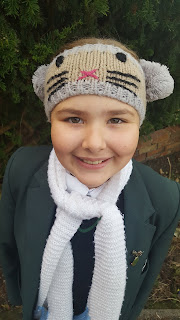 I sent a couple of pictures of the rash to my friend, wanting a Mums opinion.

The Doctor was lovely and she asked about Top Ender's symptoms. We mentioned a few that we had noticed and following on from what we said, the Doctor asked a few more questions and of course had a look at the rash.

She then diagnosed Tops with Pityriasis Rosea. Yeah, I'd never heard of it before either. Apparently it's a "relatively common skin condition that causes a temporary skin rash of raised, red scaly patches on the body" and isn't contagious just annoying and for some (including Tops) itchy.

The doctor explained that it takes the shape of a V on her front and a Christmas tree on her back, and sure enough now that the rash is developing more and more you can see it is forming these exact shapes.

The bad news is that the rash is going to stick around for at least two weeks, or could possibly be inflicting itchiness on Top Ender for the next FIVE MONTHS!

The good news is that this isn't going to cause any permanent damage to Top Ender's skin and seeing as how it could still be here at Christmas, the Christmas tree shape on her back is a perfect Christmas decoration.

So we've put some strategies in place for Top Ender to cope with the itching and now we're just hoping that Top Ender bucks the trend and the rash vanishes in days rather than weeks or months!
Family Life Illness