Top Ender at the Radio

- October 03, 2016
Every few weeks I'm lucky enough to be asked to be a guest on the BBC Three Counties Radio Sunday morning Faith show, normally hosted by someone I now consider a friend Helen Leigh.

I think it's because I have a face for radio.

At least that's what she told me.


I mentioned this to the lovely Helen and she suggested that the next time I was on I should bring Top Ender along. Helen knows all about both my children (I said we were friends right?) and my family just as I know about hers and so I was totally comfortable taking her with me. It just happened that the very next time I was scheduled to visit, Helen was on holiday.

So, Top Ender came with me to discuss the newspapers and whatever else we talk about on a Sunday morning with the ever lovely Mike Naylor, another presenter that I am very familiar with! 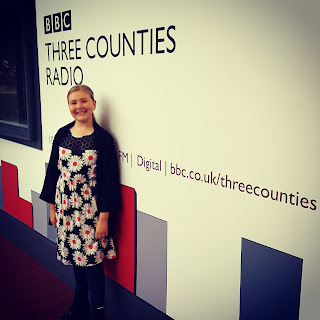 Mike was so sweet with Tops and asked her a few questions, of course being my daughter she was a natural on the radio and was able to answer the questions somewhat coherently and she had an absolute blast.

As we were travelling home she confessed to me that she had thought that it would be a little more... well complex. A Presenter and a Producer make everything happen? That's it? Of course she had seen a Newsreader and us both as guests too, but she was just surprised that it was so simple.

I explained that it was a Sunday morning, and that Brendan (the producer, I'm gonna kidnap him one day because he is just so adorable and funny) and Mike had made it seem deceptively easy because they were professionals... at least that is what they tell me that they are!

Top Ender found it all very interesting however and is angling for another invite in the future... I think I have competition for my job!
Family Life