A Surprised Bat Out of Hell

- January 01, 2019
Flyfour works in London and so if he wants to, of an evening he can pop to a Theatre and watch a Show. There are, if you look hard enough, plenty of bargains to be had with tickets and as we both love the Theatre (and I get to go fairly often to our local Theatre thanks to the Press Team) it makes perfect sense. One of the productions that Flyfour had been itching to see was Bat Out Of Hell and not just because he knew somebody to do with the production. So, one evening he went. He was so enthused with it, that he took Top Ender to see it just two weeks later.

The two of them would not stop singing along with the soundtrack album that Top Ender found on Spotify. They spent hours quoting parts of the script together until eventually I relented and told Flyfour to book tickets for the family to go and see it, but it was to be kept a secret from Top Ender. Top Ender was going to think it was just her and I going, an early birthday gift, and Flyfour and Dan Jon were going to say they were going to a Museum, but really were going to sneak into the Theatre and be in their seats when Tops and I eventually joined them.

And so in the gap between Christmas and New Year, where breakfast is a weird mix of leftovers and chocolate, we managed to get the children up early enough to get them to London in time for a Friday matinee. 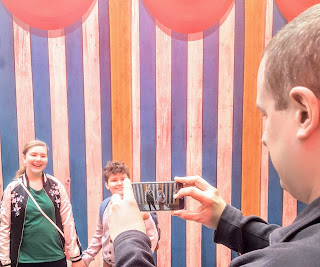 Thanks to Flyfour and I both being paranoid about being late, we managed to get to London in plenty of time, and so decided to walk down Oxford Street, as Top Ender had just a few weekends ago on her last minute residential to the ICANDO. We travelled by Tube from Shepherd's Bush, where we grabbed lunch from M&S in the Westfield Shopping Centre, to Marble Arch, where Flyfour said if he were to walk home, it would be his starting point as the start of the A5, which almost goes past the end of the road you'll find our home on too. 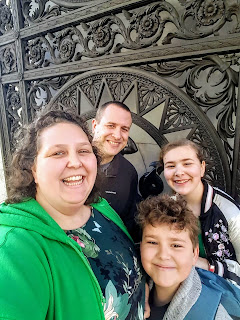 Not long after we had taken a family selfie at Marble Arch, I somehow managed to trip on a paving stone and land smack bang onto my left knee. Yes, the one I was feeling all the pain from the Sciatica in. Goodness knows how it did it, but the fall seemed to have fixed the issue and now I can easily get up out of chairs, off the floor and out of bed. I may see if I can patent this "cure", although the bruise on my arm and knee are almost enough to put anyone off.

After lunch in Soho Square, where we talked to a few very good Doggos, watched the Pigeons, and tried to work out what was so fascinating about a tree that a tour group had stopped to look at it and just how many identical looking men were in the mock Tudor building in the centre of the park (we think three, but we're not sure).

After I took a quick cocktail of various pain medications, we walked a bit further to the Dominion Theatre. Where Flyfour and Dan Jon left Top Ender and I.

All was going to plan.

Tops and I went to the Bathroom, where I spent ages in the toilet (I used the excuse of my bad back meaning I couldn't get on or off the toilet as easily), thoroughly washed my hands and pretended I couldn't work both the tap or the hand dryer (trying to stall for time) before finally leaving the bathroom with Top Ender and joining a queue of people... and queuing from the other side was Flyfour and Dan Jon!

Tops somehow didn't see them, until we were sat in our seats and she looked across and saw them coming into the auditorium. It was still a surprise, even if not how we anticipated it! We all settled down as the show started, and boy:

WHAT A BLOOMING GOOD SHOW! 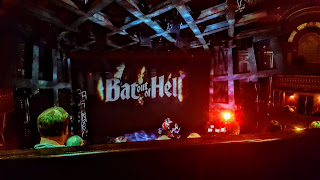 Seriously, it was fantastic and I'm quite sad there is only a week or so left of the run as I would quite happily go and watch it at least three times more and I don't think that Top Ender or Flyfour would complain either... even if it did mean we'd be eating plain toast for months afterwards.

As always, every time we go to London to see a show, we start having great plans about how we want to see many more in the near future... just watch this space!
Family Life Paid Day Out Theatre