Dates of the Year

- January 05, 2019
Before New Year's Eve, I was trying to think of a way to achieve a better balance in 2019. Last year, as a family we spent some real quality time together, I think that Flyfour and I grew closer (which I would have told you was impossible as we were already very close!) and the relationships that I had with the children changed for the better. And I didn't want this development to slip away, but to continue.

So, I thought it would be fun to organise 12 dates with Flyfour for him and I to do stuff together. Not that we won't spend other time together, but these 12 dates (one a month) would be time for us to be goofy together, to work on projects, to develop new skills, to spend time together without one of us having to worry about coming up with a plan or something fun. 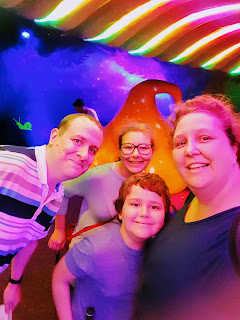 After I had come up with 12 ideas that I thought we would enjoy, I realised that Dan Jon and Top Ender would also benefit from these "one on one" dates and so I came up with 12 more for each of them.

I had intended to give them the letter on New Year's Eve, but for some reason, I forgot and so presented the letters to them on New Year's Day after we had cleared all the Christmas Decorations away (well apart from the Folly Tree, as I wanted to enjoy that for a bit longer).

Flyfour read through his two sheets (I'd explained each date to him, as they weren't really that self-explanatory and more titles of dates) and looked at me with such love after he had finished that I knew even if he wasn't keen on some of the dates he was keen on spending time with me.

Dan Jon looked at his and immediately decided that two of the dates were his favourites and ones he'd be looking forward to (I knew it when I planned them!) and said that he thought the ideas I had come up with were a good chance for us to have a giggle together.

Top Ender read hers in her room, and after much persuasion eventually agreed that there were a few dates she was excited about and would look forward to spending time with me, as long as I didn't go too overboard, or was super noisy or anything.

So, I'm looking forward to this time I'll have individually with each of my immediate family members and I'm really looking forward to us developing some new skills! I will of course blog about each date here, so look out for ideas you could recreate with your family.
Date Night Family Life Free Days Out Paid Day Out