- January 08, 2019
For a few weeks, Flyfour has been complaining about his eyesight failing him. Not when driving, or watching TV, but when he's doing close work, things like reading or looking at his phone. One evening, just after Christmas, Flyfour once more said he needed to book an eye appointment, so I told him to book one there and then, rather than waiting until the New Year to make one as he was planning for some reason.

Which is why, the children, Flyfour and I found ourselves at the Shopping Centre rather early one Saturday morning, wondering why we had booked such an early appointment, especially after our late night the night before when we'd been to London to see Bat out of Hell. Top Ender and I went off to do a bit of Girly shopping, whilst Dan Jon wisely hung out with Flyfour, watching the various tests that they did and sitting super quietly, to the point that the Optician wanted to take him home because he was so well mannered, quiet and was the complete opposite to what she said she had at home. 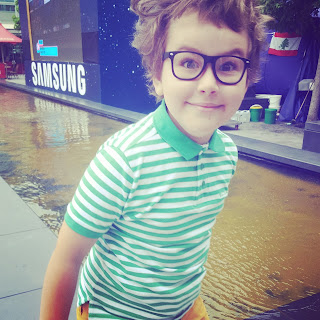 Dan Jon said most of the tests that were done on Flyfour were ordinary tests, apart from when they kept taking pictures of him, which apparently would be useful later. Dan Jon admitted that bit was amusing as it was like having a Passport picture taken, don't smile, don't gurn and don't look super depressed all at the same time.

As it turned out, Flyfour did indeed need glasses and those pictures were rather helpful, as a nifty computer programme had told him he would suit certain styles based on his Face shape.

Top Ender and I made it back to the Opticians, just in time to help Flyfour make his choice of a pair of glasses. Well, actually two pairs of glasses, as the buy one, get one free offer was on and it made much more sense to get two pairs so he could leave one at work, or in his work bag or something.

There was much teasing as Flyfour tried on the different styles that the computer programme had suggested, especially when one of the pairs were an almost match for a pair my Mum has, and whilst the print suits my err, 30 something Mother, the print didn't suit my husband!

Eventually, he picked two pairs and he went back a week later to pick them up, happy for me to tell you all about it, but not for him to be pictured wearing them! The spoilsport. Still, I'm sure that he will pop up in an Instagram picture or two if you want to stalk us for a bit!
Family Life