- January 25, 2019
Top Ender is the real reason that I'm a Brown Owl. Seeing her example and her joy as she volunteered each week with the Rainbows and Brownies made me realise that when there was a need, I was, of course, going to volunteer to fill that gap. And I'm so glad that I did volunteer and that Tops had set that example, because if she hasn't, then why on earth would I have made Pool Noodle Unicorns? 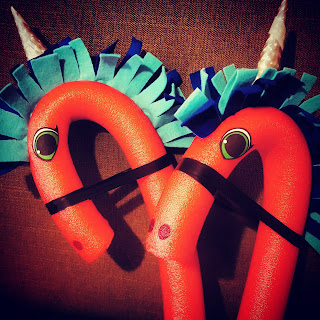 They were amazingly simple and such great fun to make too! Everything was in either my craft supplies or easily printed (the eyes!) and I made them without following a plan, just how I thought they should look.


In case you've found this picture and are hoping to make some too, these are the supplies you will need.

I bent the Pool Noodles into the crook shape and used the PVC Tape to create a harness type loop to keep them bent over.

I cut two A4 sheets of felt (Dark Blue and Light Blue) in half lengthways, before folding them in half again and cutting 3/4 of the way towards the fold. To create some fringing, which would eventually become the mane.

I cut a slit into the back of the Pool Noodle and pushed the uncut piece of felt into the slit. You could glue this in, by putting glue in the slit and then pushing the felt into the slit on top of the glue, but I didn't think we'd need it for what the Rainbows were using the Unicorns for.

I printed out and cut out eyes, which I stuck to the pool noodle using a glue stick and used a pen to draw nostrils onto the noodle too.

The last thing I did, was to cut a paper plate in half and make a cone out of it, which I stuck in place using sellotape and then wedged it into the slip in the mane too. Of course, you don't need to do this last part if you are just making an ordinary horse instead of a Unicorn!

Who knows, maybe by the summer, I'll have a whole stable of Pool Noodle Ponies and Unicorns.
Craft Family Life Hobby Service