- February 20, 2012
Big boy loves Dora the Explorer, so much so that at one point I was pretty sure she was sneaking in at night and teaching him to spell. At some point Big Boy had been passed Top Ender's collection of Dora magazines (and DVD's) and Big Boy loves to sit and read them and was getting rather excited when he saw on TV that a new magazine featuring Dora was available to buy.

The Dora The Explorer Little Cooks Magazine is about cooking together with your child and helping them (and you) to learn about healthy and tasty foods in a fun way as the magazine also has puzzles, games and stories to go with the recipes. Big Boy loved reading the magazine and was really eager to use the plate and silicon cupcake cases that came with the magazine and so we made the banana cakes in the magazine and as they were eaten rather quickly we made some other cakes and used the cases again, which pleased Big Boy as he is a big cake fan. 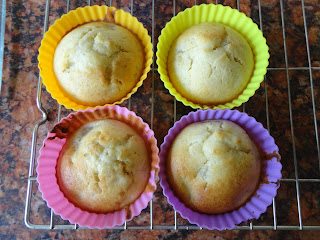 I think that the magazine is going to be a great help in the future with Big Boy, as encouraging him to eat different foods is sometimes difficult, but I think that if Dora suggests that he try something that he will be a little more open to trying something the first time and after that I can easily persuade him to try it again and then hopefully he will start to enjoy it. We work on the nine times rule, which is you have to try something at least nine times before you can claim you don't like it, so there will be a lot of trying to agree too.


Here is a little bit of video of Big Boy making the Banana Muffins, but as I was trying to help too there are a few stages missing!

We were sent the first Dora Magazine to review and have been offered a subscription too.
Magazine