- February 11, 2012
With Top Ender learning about World War Two at School (if I was still a Mummy time traveller I could just woosh her back there for the day) we have been trying to expose her to a few different films, TV series and books set in the period too. We were discussing a list of TV series and films that we thought that we could watch on our Date nights when Top Ender joined in with the conversation.

"Well, I haven't laughed yet." 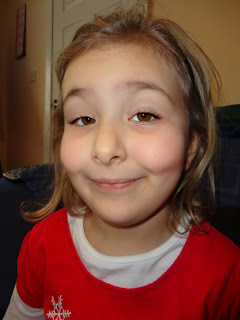