What we watched on Valentines - Dolphin Tale

- February 17, 2012
On Valentines Night Top Ender and I were eager to watch Dolphin Tale. We had seen a trailer for the film last year and had intended to go and see it at the cinema, but with one thing and another we didn't get round to it. Big Boy didn't watch the film with us as he was feeling fidgety and so Top Ender and I curled up on the sofa to watch it. 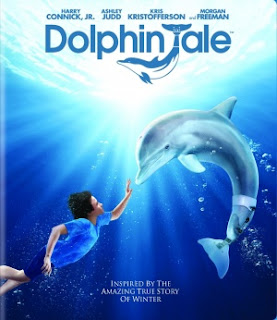 The film is really sweet. It's based on a true story about a Dolphin whose tail has been damaged after being caught in some fishing traps. A young boy called Sawyer, finds the dolphin and helps to untangle her before the dolphin is taken to the Clearwater Marine Aquarium. In the moments when Sawyer was rescuing the dolphin, they bonded and so instead of going to Summer School, Sawyer breaks into the Aquarium and finds the Dolphin and helps to nurse her better. When it becomes apparent that the Dolphins tail can't be saved, Sawyer finds a pioneering Doctor to give the Dolphin a prosthetic tail.

The film is based on a true story, which I think is great as it really is a heart warming story and it made Top Ender and I really happy to know that this wasn't something made up in Hollywood. The film was a great evenings entertainment and with a U certificate it is perfect for the whole family to watch (if they aren't feeling fidgety). The DVD is available to buy now and has an RRP of £9.99 and £14.99 for a Blu-Ray.

We were sent the DVD by Warner Bros to review.
Review