Xia-Xia Pets Review or How To Keep The Children Happy

- February 20, 2012
Big Boy is feeling rather generous of late and whenever an advert comes on to the TV for something that he likes to look of or things that he thinks Top Ender might like he comments "Let's buy that for Top Ender!". Something that he has noticed during the adverts which Top Ender has also suggested we might like to buy her for Easter (instead of an Easter Egg) is the new Xia-Xia pets range. I've seen the adverts too and as far as I could work out the Xia-Xia pets are crabs with removable shells which are then able to be swapped around between the different crabs to create something unique to the ones that your friends have. 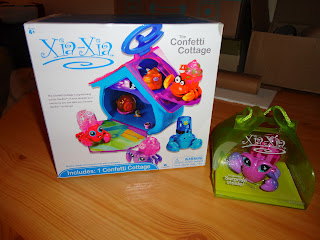 After having got the children to help to clear out the Den and to sort out the drawers which contain the colouring books, pens, crayons, pencils (and goodness knows what else) we decided that they deserved a treat and so they opened up the newly arrived Xia-Xia Pets. The packaging that the Pets come in is pretty to look at, it's easy to open too which is a real bonus when you have two children clammering to be first to see what is coming out of the package. The crab that we got is called Bimini and hidden underneath her shell is a little friend called Cuppy. Cuppy can stay under the shell, can be attached to the shell on the front on a handy little point or can be separate for adventures where she isn't getting a ride from Bimini. 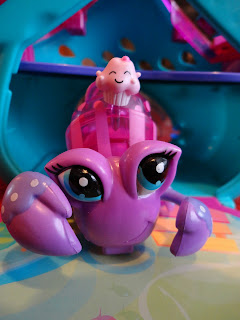 Tops and Big Boy loved the cottage and Bimini and were having a lot of fun playing with them together. They loved how when you push down on the front claws of Bimini that she scuttles around and will work out when she is backed into a corner how to get out. There were a lot of squeals of delight coming from them as they played together on the dinning table creating a fantasy world for Bimini and Cuppy to live in.

The cottage doubles up as a carry case, which Top Ender used when she went to stay with her Gran this past weekend and wanted to take her new pet crab with her. Since we have opened the Xia-Xia pet and cottage Big Boy and Top Ender have loved playing with them and are hoping to be treated to more and so are keeping the Den and the drawing materials all nice and neat! I have found the confetti cottage for £9.99 and the crabs for £9.99 (for one) at Argos so I don't think that it will be too long before the rest of the set of Crabs and the other habitats will be gracing our Den!

We were sent the Xia Xia Confetti Cottage and Bimini the Crab to review.
Toys