- July 23, 2012
Daddy loves eating burgers, but unless they are 100% Pure Beef he can't eat them. There are a few brands that we have discovered we can buy but they tend to be on the small side to eat just one and eating two is just too much (for me at least) and so if we want a good burger we tend to make our own, or rather Daddy does. I decided that I was going to make some for dinner last week, and as I normally use egg as a binder it was going to be an experiment as Daddy is reducing the amount of egg he is eating, so I couldn't use it this time.

The burgers were so easy to make I thought I would include how to make them here. I made a lot of burgers so that I could freeze some for use at a later date, but Daddy ended up eating them for lunch over the next couple of days as they were quite nice.

I took a pack of low fat beef mince, and added to it a chopped white onion, a handful of chopped plum tomatoes, some seasoning (salt and pepper) and some parmesan cheese that happened to be in the fridge (I have no idea what dish I was planning on using it in so figured it was a good choice!) I mixed it all round really well so that all the flavourings were evenly distributed and let the mixture sit in the fridge for a few minutes whilst I greased some baking trays and some cooking rings. 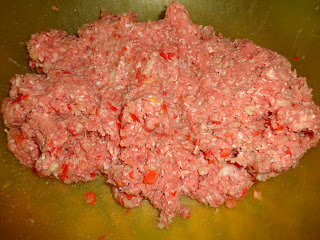 I grabbed a small handful of mixture after it had chilled for about five minutes (and everything was greased) and placed it into the cooking ring (on the greased tray) to give it some shape. It was a bit of trial and error in order to find what the right size burger was, but I found the right size for us and even made a few burgers for Daddy which had grated cheddar inside.

To make the burgers with grated cheddar inside I put down just over half of the burger meat mix into a ring added a pinch of grated cheese and then made a small circle from the left over part of the handful of mixture to put on top of the cheese, before firming the meat down. I put these onto a different tray so that they wouldn't be confused with the ordinary burgers  and I let them all chill in the fridge for about an hour.

I cooked the burgers on the griddle (I love my griddle, no fat required) and only turned them once as I was worried that they would fall apart, but I needn't have worried as they held together really well and I could have cooked them on the grill or even on a BBQ. I served mu burger in a bun, with a lovely Salad and a massive grilled mushroom. 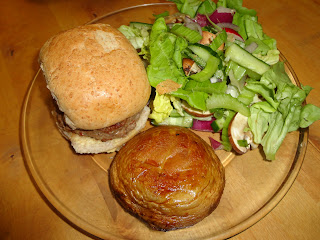 Top Ender and Daddy had chips with theirs and they both had two burgers as they thought that the burgers were delicious. As I mentioned already Daddy ate them for lunch over the next couple of days and as a late night snack when we got back from the hospital on the Friday. He heated them up in the microwave and he said they tasted just as nice as they did the first night.

Do you make burgers? What extras do you add into your mix? Please give me some ideas for other evening meals!