- July 05, 2012
Last night after we had eaten dinner, Top Ender and I were going to go swimming whilst Daddy watched the end of the Andy Murray tennis match. It should have been Daddy taking Top Ender, but Daddy had wanted to watch the tennis and so I had said I would take Tops instead. As luck would have it just as we were ready to go the tennis match finished and so we decided that we should all go as a family. Despite it being quite late compared to the children's bed times, we didn't mind we knew that a good swim would help the children go to sleep and to have a good sleep.

I've discovered over the last couple of weeks that exercise means that the sleep after is deep and relaxing and solid. I do love a good solid sleep, and I'm loving the gym even more but that's for posts over at Pippa World so if you have no idea what I'm going on about head on over!

We arrived at the pool and were soon having fun. After Top Enders swimming session with Daddy a couple of weeks ago we realised that Tops has pretty much forgotten all the swimming skills that she had learnt when I took her weekly for swimming lessons. I'm not surprised really as there was a huge gap in between when she had last gone swimming, but I knew that the memory was still there she just needed to access it. After a few widths of Tops swimming with her newly purchased Pool Noodle I took the noodle from her and asked her to swim without it.

Tops looked terrified, but she knew that I was going to be right next to her. So she pushed off and swam and swam and swam. We ended up putting the noodle on the side next to one of the lifeguards because she was swimming so strongly. It was lovely to see her confidence just explode as she realised that she was swimming without aid and Daddy and I were very proud of her.

Big Boy of course was loving swimming with his pool noodle and was doing brilliantly having races with whoever was closest to him. Big Boy is doing so great with his learning to swim that I'm pretty sure by the end of the year he will be swimming without aid too.

We ended up putting the children to bed at 9:30pm, but nobody minded because we had had so much fun together. I think that late night swimming might become a regular family treat quite soon. 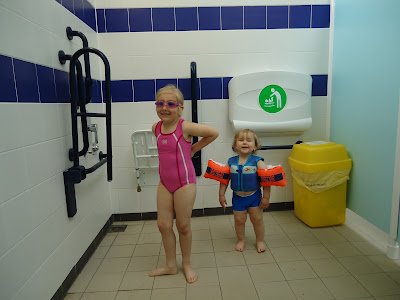