- July 02, 2012
My Mum and I used to watch quite a lot of films together when I was young. My Mum knows everything about every actor ever and is the best person to have on your Trivial Pursuits team and so when we saw that Murder on the Nile was coming to Milton Keynes Theatre we were really pleased to be offered tickets as it was one of our favourite films to watch together on a Sunday afternoon. 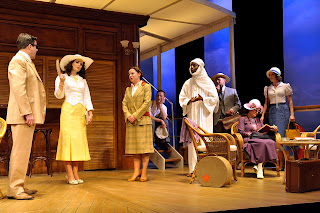 The stage version was fantastic, my Mum and I really enjoyed the show and despite already knowing who did it and how they did it and when they did it we were caught up in the drama as it unfolded. My Mum knew who a lot of the cast were, partly due to her encyclopaedic knowledge of people in the entertainment industry (I recognised some of their faces, if not what they were from) and partly because she is really clever!

It was really nice going to the theatre and not seeing a musical as I normally go and see. I guess having my Mum as a theatre companion makes me appreciate a wider range of theatre.

We were given two tickets to see Murder on the Nile by Milton Keynes Theatre.
Review