- July 23, 2012
Big Boy loves getting parcels from Duplo, as soon as one arrives he puts away whatever he was playing with so that he is ready to open the box and see what new toys are there. This afternoon he was just about to play with some trains, whilst Top Ender and I did some step aerobics, when a parcel arrived. Big Boy had put away the trains and opened the parcel before the delivery driver was back in his van! 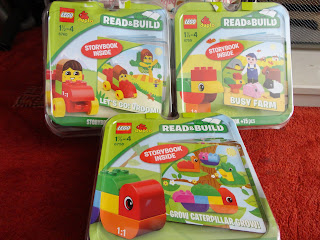 Inside the parcel were the new Duplo Read and Build sets, which are due to hit the shops on August the 1st 2012. Big Boy saw that one was about a car and a plane and decided that was the set he would open first, he is really into anything that moves at the moment!

This is a new concept for the Duplo range, and is in conjunction with publisher Dorling Kindersley but I think it has been executed perfectly. The books are a story and instructions on how to build the bricks together to make the characters in the story. As we read the book together I was thinking how they are good for early readers as there is a great deal of text and so aren't too daunting. 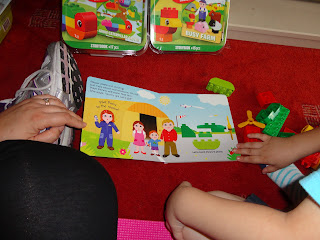 Big Boy loved putting together the plane and the car following the instructions and was joining in with the book when he could. He then had a great adventure playing with the plane and car based around what he had read in the book and it was quite amusing hearing him pretending to be Penny and Joe, who are the characters in the book. It also led him to be imaginative as he had Penny and Joe wing walking and screaming in terror when he made the plane do loop the loops! 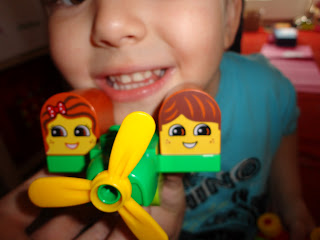 Big boy is still sitting on the floor playing with the first set he opened (it's been about an hour now) and he hasn't gotten bored with the role play of the two characters. I'm surprised that he has played with the set for this long, but maybe the story has sparked his imagination more than playing with Duplo just "straight".

LEGO DUPLO Read & Build comes in a plastic re-sealable pack and is suitable for children aged 8months to four years. The RRP is £9.99 and they will be available in stores as of the 1st August 2012. We were sent the three different sets as part of the Lego Duplo Bloggers programme.