- October 04, 2013
Last year when I started my weight loss journey (it's a lot harder to lose now, but thanks for asking) the fitness bug also got Daddy and spending the vouchers I had won at The MAD blog awards on a bike for him seemed the logical thing to do... the problem was competition soon broke out over who was getting fitter fastest and so one sunny afternoon leaving my Mum in charge of the children Daddy and I went for a bike ride together. To cut a long story short, he was fitter but I LOVED cycling out in the open, especially because Milton Keynes has a myriad of cycle paths so I would be safe whilst cycling. 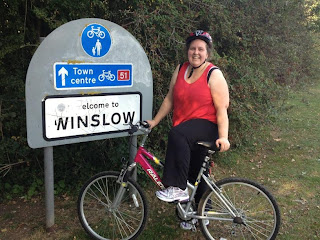 Top Ender learnt to ride a bike without stabilisers that summer, and she loved cycling too. Memories of my childhood came back, where my parents would take my sister and I and our four bikes to various villages around the UK and we'd cycle a route from a Readers Digest book that someone had brought my parents. Daddy and I knew that we could do this, we could cycle as a family, but there was a problem. Big Boy wasn't able to cycle for long distances with us.

It would be no problem, we thought, we could strap BB into our cycle trailer and he could happily sit in the trailer being pulled along. It was BB who first voiced objections to this. He didn't want to be stuck in a trailer, he wanted to be out on a bike cycling with us, but we knew that he wouldn't be able to keep up and he'd need extra help. I had a good scout around the internet for a suggestion or two and kept seeing comments about the Burly Piccolo Trailer Bike, which allowed children to peddle when they want but to coast along behind a parent when they needed a bit of a rest. The only problem for me was the cost. At £349.99 it was just too much for us, even with the promise of increased family health and fitness.

And so I came up with a plan, if I applied to the Family Welbeing Index that Actimel for funding for a Burly Piccolo Trailer Bike, I might be lucky. I might get to buy the trailer bike and then we could go out as a family and exercise together and generally just have fun.

Yup. That's right, we got a Burly Piccolo. 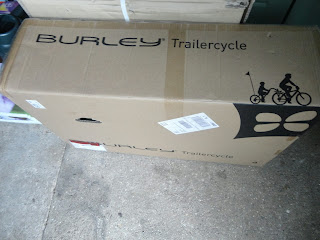 I'll post more when we actually open the box and get it attached to either mine or Daddy's bike, but if it keeps raining it might not be for a few days!
Diabetes Family Life Review Weight And Fitness