- October 21, 2013
I know that Halloween hasn't yet happened, but already we're thinking of Christmas and how we can get more into the Christmas mood. Luckily for us Ravensburger sent us Santa's Rooftop Scramble which has had us in fits of giggles, singing Christmas tunes and thinking about our Christmas lists. 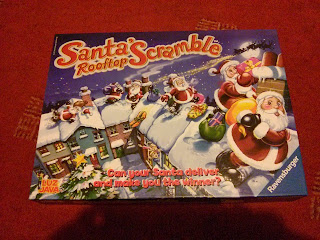 Big Boy was the one that was most interested in the board game, begging us to open the game from the second it was delivered. It took us a couple of hours to get our chores done, but when we did sit down to play I was a little frightened by the amount of rules and instructions the game came with. Luckily Daddy read through them and discovered that the game was surprisingly simple, it just came with rather detailed instructions. 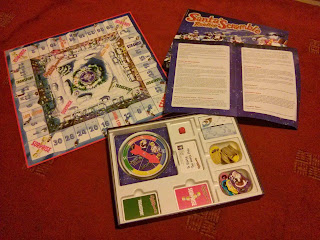 The general idea of the game is that you are Santa and in charge of delivering some gifts to children. First of all you have to spin a spinner to collect all the gifts you need, this can take multiple turns, or as Big Boy found on his first go, it can take just one spin of the spinner if you land on the Father Christmas!

Once your bag is full of the gifts (metaphorically speaking, there is no bag for the gifts before you all start complaining) you must move around the board to deliver them. When you land on the right house (the squares are numbered) you can deliver the gift down the chimney.

There are plenty of  twists and turns in the game, you might have to pick up an additional card to add to your deliveries or you might find a card that lets you deliver a gift straight away without having to roll the dice to get to the right square, you might be moved to the other side of the board or you might find that you are allowed to give one of your deliveries to an opponent... not that I did that to Top Ender when I thought she was about to win! 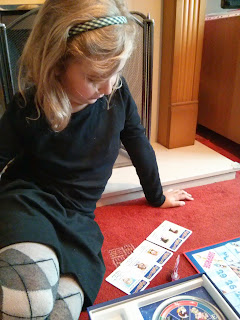 We have played the game almost non-stop. Big Boy sets it all up and demands that everyone plays and because it is fun we all agree. 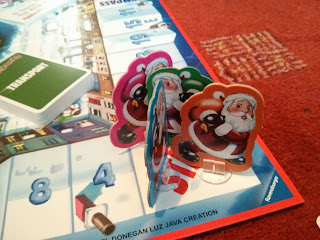 The game is aimed at children aged 5+ and is available to buy now.

We were sent the game to review.
Christmas Review Toys