- October 05, 2013
The menus this week are still following the low carb diet that we're trying out. BB is still getting complex carbs earlier in the day, but we're finding that he's maintaining a better blood sugar over night, with this diet.


I really fancied Pork Chops, so decided to make a simple sauce with the Total Greek Yoghurt, some chives, some mushrooms and whatever else I already have in the cupboard. The favourite way in this house to have pork chops is to have apple sauce and cheese, so I'm hoping that this will knock it off the top the top spot! 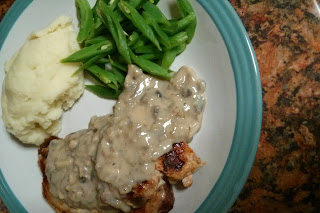 
We didn't get our Salmon last week, there was a little issue with dates and this week I've decided I'm going to make Salmon Chowder. Please nobody tell Daddy that the Chowder I'm making is going to have sweetcorn in it!


After we had the Chickpea Burgers last week, I really wanted Mushroom Burgers so thought I'd do them today. I'm doing them with a little garlic as I felt that was what the chickepea burgers was missing.


Daddy requested this last week and so we decided to go with it today. Well actually, we were supposed to have it Saturday but we don't go shopping until after we've eaten lunch so it got bumped to today.


This was so great last week, that the children asked for it again. I'll blog the recipe because whilst it is surprisingly simple, there are a few little touches I add that make it superb!


I'm going to do some nice ones for the children following the same recipe I did with Gordon Ramsay and some for Daddy and I a bit later in the evening too. Watch out this week for a give away relating to this recipe too.