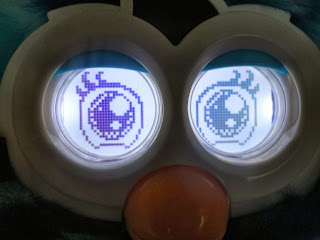 When it arrived, the children spent ages agonising over what to call it. I spent what felt like hours agonising over getting the darn thing open to put it's batteries in. It called for a Phillips Head Screwdriver, but the three that I had easy access to were all too big (circumference wise) and so after thinking for a moment or two I went out to the car to find the car toolbox. Every family has a car toolbox right? Eventually I managed to get the battery compartment opened, I put in the 4 AA batteries and closed the Furby Boom's bottom, and hoped that when it eventually ran out of battery that Daddy would be the one that had to change the batteries. 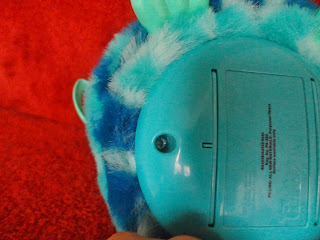 It was by this point that the children had realised they could download an app on to their tablets to connect to the new Furby Boom and were busy downloading and installing it, having a race to see who'd be the first to connect up with the Furby. Although Top Ender was quicker, the Furby didn't seem to be able to "hear" her Tablet so we let Big Boy have a go and he connected within seconds. It was not long before we had to go to School, so the children were quite happy with helping hatch a digital egg and naming the new digital Furby something which set them off in squeals of laughter, but more about that later. 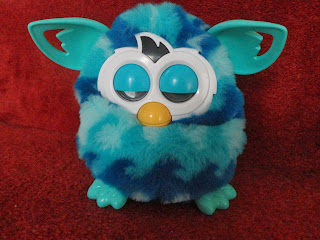 When I got back from dropping the children off at School I tried to connect to the Furby with my tablet and was able to eventually connect to the Furby, but it took me a few attempts. Later that evening Daddy fiddled around with Top's tablet (mainly cleaning it) and eventually got it to connect, but it seems to only like BB's tablet (which is identical to Top Ender's!). The Children have been taking it in turns with playing with the Tablet, and it was only after Big Boy asked me to read out a few words when he was naming a new hatched digital Furby that I realised why they had been squealing with laughter on the first morning. Some of the name combinations when translated from Furbish to English were a little... childish. 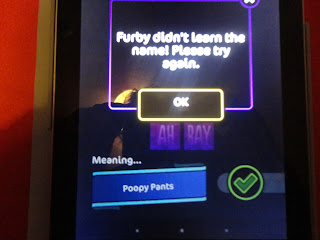 Luckily after a quick chat about why some words were inappropriate to use in combination together my two stopped calling each other and Daddy and I Poopy Pants. Now, because I know that you are all going to be buying one of the Furby's for Christmas, here is a little of what you can expect your children to be doing Christmas day.

Oh and, just so you know the story I told the other day on Facebook? It was about a soft toy one that we brought for BB, not this electronic Furby Boom!

We were sent a Furby to review. He hasn't been put on a high shelf... yet.
Review Toys