- October 26, 2013
I had planned nice warm meals for last week, ones that caused the kitchen (and therefore the house) to heat up and would also allow us to warm up from the inside out. I don't know if it was the same for you, but for us it was a very mild week and having so much warmth in the house and our bodies was not a good thing! I'm making everything for dinner this week spooky in honour of Halloween this Thursday!


When Top Ender went on a Brownie trip to Nando's she was given a letter which gave her a free meal at Nando's in the not too distant future. I had originally planned to take her and BB on my own one night when Daddy was still commuting home, but as we like our weekends to have a focal point we thought that a trip to Nando's tonight would be fun for the whole family.


I decided that I wanted lamb today, so one roasted Zombie arm later, along with roasted potatoes, vegetables and some Yorkshire puddings and we have a creepy dinner. I'm sure a blood curdling pudding will be available for Tops and BB as it is Sunday.


We didn't have it last week, so we're having it tonight instead! I'm going to add a few ghoulish faces and a little Halloween pudding of carved oranges. 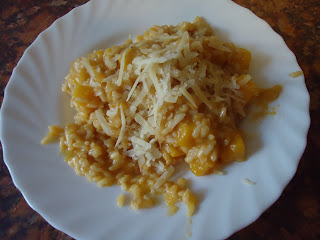 
I've been wanting to make Potato Souffle's for a while, but I thought that a Ghost Souffle sounded much more fun. I'm going to serve it with some of Sunday's leftover lamb.


We seem to be stockpiling pasta again, so I figured we'd better use it up!

Thursday -  Toads or Rats (Toad in the Hole or Meatloaf)


I'm not sure which I'm going to make and I did ask on Facebook and Twitter, but there wasn't a majority vote,so I'm going to decide when I go shopping! I think though that it's going to be a fun dinner, especially with a few trick or treaters turning up!


This is just soup, with toasted sandwiches in the shape of men, simple but fun!


So what are you doing for dinner this week? Are you planning to eat something special on Halloween?
Food Meal Plan