Aladdin, AKA Why I'm in love with Gary Wilmot

- December 12, 2015
There is nothing that quite compares to the excitement of going to a Panto at Christmas.

Amongst all the Childhood favourite things like having an Ice Cream (although £16 for four is a bit steep!) and getting dressed up and getting a light up "thing" and eating sweets when you should be in bed are all there.

There are even things that you come to appreciate more as you get older.

You know things like how the way the local places are written into the Script (everyone loves a shoutout), the naff acting from a big named celebrity, the forgetting and fluffing of lines, the jokes for adults that go completely over Children's heads (well not over Top Ender's this year!), the slapstick, the barely there costumes (oh is that just Daddy that likes that?!), the pop songs being somehow slotted in and of course who doesn't like to scream;

Oh no we're not

The panto at Milton Keynes Theatre this year, Aladdin, has all of this in spades. Despite what some big shot London reporter says.

Oh and it has a handsome Aladdin.


Sorry Ben Adams from A1, I had no idea who you were prior to this but aren't you a big old hunk of lovely? Also I apologise for not working out before the first scene had finished that you have a hairy chest and you weren't wearing a woolly jumper under you costume. However, seriously why don't I know who you are? You sing marvelously, you're blinking handsome and you ride a rug well. 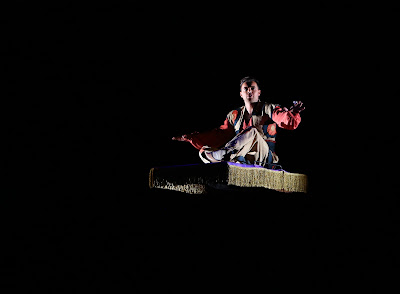 Anyway, enough drooling over Ben. Although he is only two years younger than me so you know we could get together...

This year the Panto has local celeb Gary Wilmot, (who if you are around my age you probably remember being on the TV all the time) who lives just round the corner from me. Let's just put it this way. 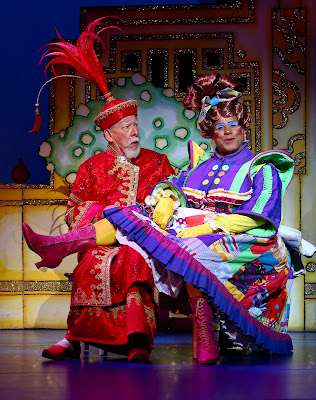 The best scene for me was watching Widow Twankey flirting with the Emperor to Marvin Gaye. Honestly best two minutes of Panto ever and David Whitworth was wonderful at resisting Widow Twankey's "charms" and generally being a Dad who wants his daughter to marry well.

There were of course others in the Panto, the ever funny Kev Orkian as Wishee Washee. I think MK should adopt Kev as our resident Panto funny man and just keep him year after year (I believe this is his third MK Theatre Panto) because he is a master at getting the audience going, keeping the energy up and of course flirting with the audience.

Marc Pickering as Abanazar got plenty of Boo's which, to me is the sign of a great baddie and Aimie Atkinson (Princess Jasmine) and Phil Holden (PC Pong) were both great at what they did.

Wayne Sleep has a little tap number, which was good and showed the talents of the Swings, but it did seem a little out of place. Luckily it's Wayne Sleep so all is forgiven but his fluffing of his lines at one point had Big Boy commenting "Err, isn't he supposed to rhyme?".

Talking of which, can I just apologise on behalf of the people of MK to Bruce Airhead? We didn't get what you were doing to start with. You were a little lacking in energy, but I hope that we made up for it when you came out at the end for your Curtain Call as by then we realised the genius of going inside a balloon and bouncing around a bit. 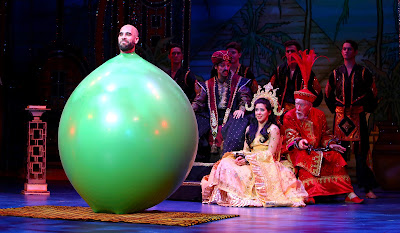 The supposed biggest name in the Show this year was Priscilla Presley.

I practically had to sit on Top Ender to stop her shouting out "Nice Beaver" (Yes, Tops has seen the Naked Gun franchise) every time she came on stage, but thinking on it she was rather stiff (Botox?!) and maybe that would have loosened both her and the cast up a bit when she was on stage. Then again she is 70 years old!

I hope I look that good (but without the surgery) at 70.


So should you go and see the Panto?

Why? Because we're British, it's blinking funny and you and your family will love it!


Yes, we did receive free tickets to see the Panto, but that hasn't influenced my review. In summary I think the Ice Cream costs too much, the cast were fab and Eric Potts (Who I swear writes all the Panto's in the UK) and Milton Keynes Theatre have created a perfect family Panto again.
Advent Christmas Family Life Paid Day Out Theatre Treat Night