Nerf Fights, A #Review And A Secret!

- December 30, 2015
A few weeks back, one of the young lads that I know at Church had a birthday. For his birthday he got a Nerf gun, and being the Nerf gun fanatic that I am (thanks to the education my children have given me) we started chatting about the various Nerf Guns we owned and he mentioned his plan to have a birthday party at the Chapel, where all invited could use their Nerf guns in an epic battle.

Somehow I managed to wangle an invite.

The Children and I turned up to find that the young lad and his Dad had set up bases and hide holes and it was going to be amazing. As the only grown up at the time that was playing, I decided to step back and not be on either team because I didn't want one team or the other to have an advantage.

I'm such a crack shot, that whilst I was standing in the Vestibule I "accidentally on purpose" shot Bishop (the "Vicar" figure of our local congregation) whilst not looking, because I wanted him to think it really was an accident. The ladies I was standing with thought it was hilarious, but that wasn't the purpose of shooting our Bishop... The only reason for me shooting Bishop was because this was the only time I could shoot him without getting in trouble!

I unfortunately don't have any photos from the day as I accidentally left my phone in the car and Daddy drove the car off before I could stop him and get it and then of course, I couldn't call him because HE HAD MY PHONE!

Top Ender had her new Nerf Rebelle Secrets and Spies Arrow Revolution Bow, which she had been sent to review. 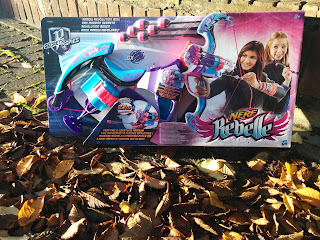 I was being incredibly sexist and didn't think that the boys at the party would care that much about it, but by the end of the session I think that everyone had had a go, firing arrows down the Cultural hall! (It's a big Sports Hall at the back of our Church building, we play Sports, hold events and generally be active in this area!). 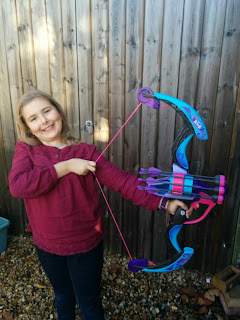 Now, don't tell her but for her Birthday in a few days, we're gifting Tops an introduction to Archery course. I can't wait for her to do this and to have a talent just like me, after all I was Katniss before Katniss was Katniss!

We were sent the Nerf Rebelle Secrets and Spies Arrow Revolution Bow to review, it has an RRP of £39.99 and is real fun!
Family Life Review Toys