What We Are Eating This Week W/C 12th December

Later today we have our Nativity at a local Old Folks home. It is one of my Christmas highlights as the Old Folk love seeing the Children and they love watching the Nativity and then afterwards we sing different Christmas songs and visit with the residents for a while. 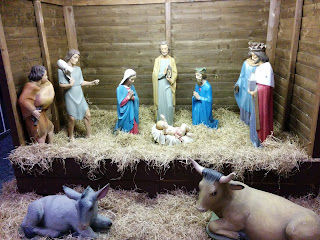 It's going to be great!

This year, after we have been to the Old Folks Home, we are going to perform again at Church for all our Friends and members of the ward and then we're going to have a party and a munch and mingle and it's been decided that several sisters will bring Lasagne for us all to share.

I'm making a Lasagne or two. Gluten free of course as hopefully Daddy will be joining us and there are a couple of other members in the ward who eat gluten free too.


Daddy wanted us to have Sausages and Apple today, but I really wasn't feeling it. Then I decided that we'd have Steak because who doesn't like Steak?

Well, other than BB that is.

Sausages and Apple it is.


I think I'm going to be in withdrawal this Monday because for the last couple of Monday's I've had Daddy at home with me and today he is at work!

Oh well, with him out of the way that means all the more beans on toast for me and the Children.

Tonight we're having Breakfast for our evening meal because who doesn't love Pancakes and Bacon?!


We're off to see Top Ender in her Christmas Concert tonight. I'm looking forward to it, because it is her first Christmas Concert at her new School. I'm not sure how BB is going to handle it! In the past we've used bribery, and even the tagging technique where one year I go to the concert and the following year Daddy attends.

I'm pretty sure that BB is old enough now however to be going and enjoying the music so we're taking him and my Mum.

After we've had an evening meal of course.

I'm thinking that we'll probably pick something up out of M&S and cook it at home.


Our clubs have finished for the year, well Beavers has and so we're not needing to rush around eating super early tonight.

We're going to have a Carb free night as I need to sort out BB's rise between 6am and 8am and I really fancy Omelettes!

Today was the last day of term and I am so pleased about it that tonight we're going to have a super easy meal of Sandwiches to celebrate.

Now I know Sandwiches doesn't sound very exciting, but the Children will get to make whatever they want (no doubt for Top Ender that will mean Baked Bean Toasties) without too much fuss from me.

I'm pretty certain I want a Spaghetti Sandwich, I'm almost positive that BB will want a PB and J and Daddy? Well the Steak and Onion ones we had the night we went to Panto were so lush I'm sure he'd like to eat that again!

We'll be off on a Christmas Light Hunt tonight too, so there will be some treats later on in the evening which is why we have a "small" meal.


So, what are you eating this week and what would you have in your Sandwich?
Food Main Meal Meal Plan