What We Are Eating This Week W/C 26th December

- December 26, 2015
You know how last Saturday my meal plan post had been written back in October? Well, this one wasn't, it was written on November 2nd. It was for the same reason however, I knew that we needed to be extra organised because we have special meals from Christmas Eve right up to Top Ender's Birthday on the 3rd of January and for these ten days all diets are off... well sort of. We don't really stop dieting, we just might eat foods that we don't normally eat!

Saturday AKA Boxing Day - What Ever My MIL Cooks!


Normally, we go to visit with my MIL on Christmas Eve. This year however with Daddy working until a bit late on Christmas Eve, we didn't have time and so we all agreed that we could go on Boxing Day.

And so we're going to visit with her today and have lunch and hopefully be so stuffed that we decide to just eat leftovers for supper.


We figure we're going to be a bit over the Roasts, so despite it being Sunday we're not doing a Roast. In some ways I'm way thankful because calories, but in other ways it's been so long since we had a roast I don't think I mind eating them three days in a row... 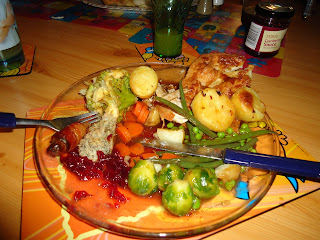 Well, we're going to do leftovers today and I'm going to give the Children extra pudding so we can get rid of the cake that is probably hanging out in my fridge!


I figure after all the meat from the last few days we're going to need a day off today. I am quite in love with several of Jamie Oliver's recipes at the moment (his Gluten Free Cupcake Recipe is just as good as any non gluten free recipe I have ever tasted!) however I'm not going to make one of his Veggie Curries tonight (because BB won't want it) but Microwave Risotto instead.

I'm making it mainly because this is the one meal that EVERYONE in our house will eat and say they love despite it having no meat.


What can I say about my fish pies? Daddy doesn't like them. I do. I'm in charge and so we're having one.


The Children love these burgers almost as much as Daddy and I do. We marinade Chicken breasts in BBQ Sauce and then grill them and serve them with Salad in lightly toasted buns.

And then we have another bit of Chicken because it is seriously good.


Many Years ago on New Years Eve Daddy went out to get Kebabs for us and my family. The first year I went with him and the second year although it wasn't quite Midnight, it was close enough that I was panicking that he wasn't going to make it back before the Chimes!

Anyhoo, we gave up Kebabs several months ago. I did first because I always feel like I've been licking the carpet for days after eating one and then Daddy felt like he'd been poisoned (what we call it when he has accidentally ingested wheat) twice after going to our former favourite Kebab store.

So, tonight we're going to have home made doner kebabs, made in the slow cooker and hopefully just as yummy.

I did say hopefully!

This will be the year that my family gets fit and healthy and we're going to do it properly. Salmon and Noodles is healthy right?!


So that is what we are eating this week.

How about you?
Food Main Meal Meal Plan