- December 18, 2015
Over the last few weeks, my Facebook timeline has been filled with photographs of people off out with their Office for a Christmas Meal or having a Christmas Party. Daddy has been to a meal out with his work colleagues and with some friends, even Top Ender went to a Christmas Guides Camp and then out for a meal with her Guide friends a week later.

The only two who are missing out this year are BB and me.


Due to a conflict in our very busy Schedules, BB was unable to attend the Beavers Christmas Camp, because he was already committed (along with Top Ender and me) to performing in a Nativity at an Old Folks Home.

Seriously my Home Teachers called the other day to see if we could arrange a time when we were both free. Every time they were free I was at some event with the Children (Carol Concerts, Church Services, Volunteering, Charity Collection, the list goes on) or as is also quite common ferrying them around town to their various events, groups and clubs!

Anyway the conflict meant that BB couldn't attend Beavers Christmas Camp and so he and I wouldn't have a Christmas party. BB and I are a little upset that we've missed out.

So we've had an Office Christmas Party of our own!

Big Boy and I headed off to a Harvester, where BB was quite insistent as the man of the party he should request our table. 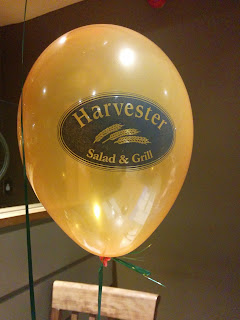 He also explained to the lovely lady who was seating us that this was our Works Christmas Party! 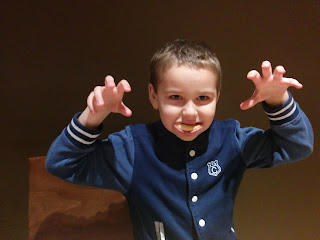 This caused much hilarity, we were sat next to the Christmas Tree, given some balloons and generally we just had a good giggle with our Waitress who tried to make the evening super special for BB and I.

Well mainly BB, I think she liked him.


BB and I did all the usual things that you do at a Christmas Party.

We ate, we drank, we laughed, we played silly games, we sang a few little Christmas songs (quietly we were in a restaurant after all!) and we ate even more. 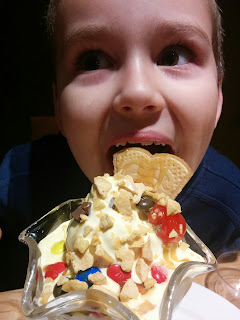 Our party was brilliant.

I can't wait for the next one.
Christmas Family Life Food Paid Day Out Restaurant