Elf On The Shelf Fun

- December 02, 2015
Earlier this year, I talked about how there was an end to the Childhoods of my Children as I had imagined it happening for them growing up myself. You see, Top Ender clicked about the reality of Santa, The Elves, The Tooth Fairy and a few other "magical" things that happen in our home.

It was okay. Tops was after all, just a month shy of her 11th birthday and I think that's a pretty good run.

However Big Boy worked out the truth himself too.

I really wasn't ready for him to work out that there isn't as much magic in the world as I would like, but I don't want to lie to my children I did tell him the truth. At first it was just about the Elves, but as I said in my original post BB is Velociraptor in Jurassic Park smart.

He worked out about Santa.

So, with this in mind I want to make *this* Christmas more magical than ever.

I started thinking, which is a very dangerous thing to do.

And then I hit upon an idea, but I needed Daddy to help me.

Slowly all the pictures in our house are being Elfed.

Just a couple a day until hopefully, all pictures in our home feature an Elf. 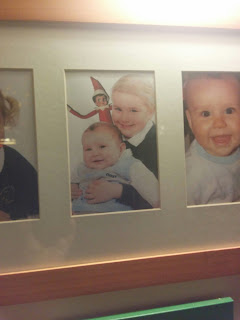 I was hoping that the Children wouldn't notice, but whilst practising the ChaCha, BB noticed Belle hiding behind him and Tops in Tops first School photograph.

At the moment both BB and Tops are confused as to how this has happened. They are pretty sure, the picture didn't always have an Elf in it...

I've explained I think it is Christmas magic and as we get closer to Christmas, I think that maybe, just maybe we'll see more pictures with the Elves in.
Advent Christmas Family Life