- October 13, 2017
The problem with knowing a little about everything, is that sometimes you don't know enough to stop people from unnecessarily scaring you. Which is what happened when Electricians in the past have been to our house and looked at our fuse board, which was installed back when the house was built in 1960. 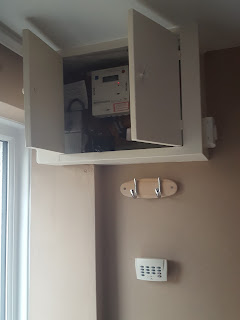 You know that sucking teeth sound that people make before they give you bad news? That's the noise they'd make, before telling us that they would need to rewire the entire house if they were to replace the fuse board and of course that's before they'd done the bonding, which required a lot more teeth sucking.

Flyfour and I couldn't afford for the whole of my house to be rewired, nor the making good and redecoration expense afterwards. So we did what everyone does, we ignored it and pretended that it didn't matter.

Then when we had the Kitchen done, we needed a bit of electrical work doing and the Electrician who came out talked to us about replacing the fuse board and bonding the gas and well, he explained in a way that didn't sound scary.

He explained in layman's terms and confirmed that until he actually did some testing he couldn't say if the whole house would need rewired... but it probably wouldn't and whilst he couldn't be sure until he checked the wiring and changed the Fuse Board, he was the first person to actually say that it wasn't a done deal.

Flyfour and I liked this man and his straightforward manner and so we gave the go ahead for the works to go ahead. And before I knew it the fuse board was replaced. 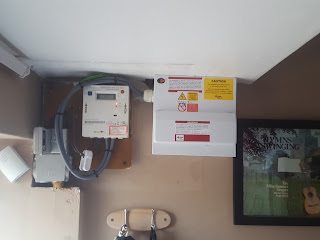 And bonding was organised and installed and made neat. 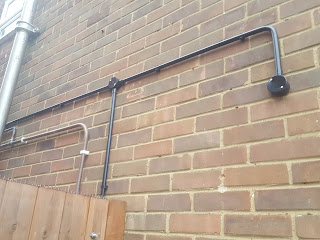 And the only rewiring that took place was between two sockets in the children's room that had been wired backwards or something and it took the Electrician just minutes to sort it out and ensure that it was safe for the family.

I know that it doesn't seem as flashy as the new bathroom, or the new hall carpet, or the front door but you know what? It was probably the most important work we had take place this past year and the one thing that I didn't put on my list.

Now, does anyone want to come and help me build a new cupboard to go around the fuse board?!
DIY Family Life Home Improvements Making A House A Home