- October 28, 2017
When I said to Dan Jon I wanted to make some ghosts with him, he jumped at the chance for a little one on one time and because he knew that crafting with me would be a good way to check off the make something from the free time rules we have during any time off, that I had instigated in the Summer. 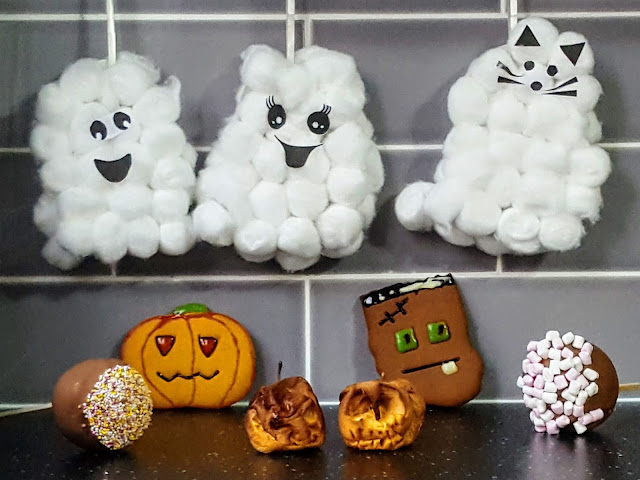 They were so fun to make, that Dan Jon thought we should blog about them as a craft that others might like to make and I bet, like me, you have all the items needed to hand too and if not, well they are very cheap to buy.

The supplies that you need are;
Card (an old cereal box will do if you haven't got any sheets)
A Pen
A Hole Punch
Scissors
Ribbon
White Glue
Cotton Wool Balls
Black Paper or plain paper and a black pen or access to a printer

To start with I sketched out three simple ghost shapes on a piece of A4 card. I decided to go with the traditional sheet over the head look, just because I wanted these to be cute rather than horrifying and my sketching skills aren't as clever as anything other than odd shaped blobs!

Dan Jon and I then cut the ghosts out, and used the hole punch to put a hole in the top of the ghosts heads. We did consider doing two holes, but decided against it. Then using a squeezy pot of white glue, we followed the outline of the ghost, before going a little crazy on the inside of the glue line we had created. 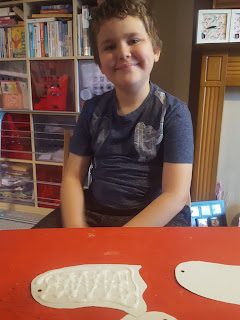 Whilst I started putting glue on the other two ghosts, Dan Jon started putting Cotton Wool Balls on the ghost shape. He started by following the outline and putting the balls as close to the edge as he dared, the aim being we hoped to hide the card entirely.

Dan Jon was also really smart and ensured that the balls near the hole punched hole weren't covered, I'm so glad he remembered because I didn't! 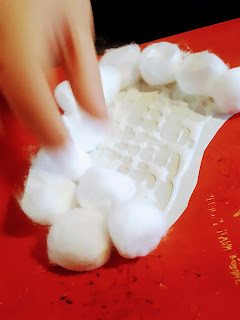 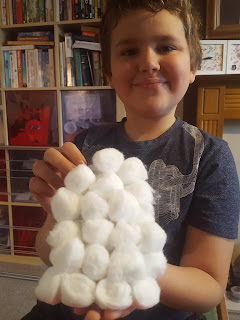 Okay, so I put them to one side to dry and forgot about them until the next day. It wasn't my fault, I'm old and have a lot to remember these days...

The next morning, when I remembered, I threaded some ribbon through the holes and was going to cut out some faces from black card that we had, but I decided that instead I would find some faces for pumpkin carving templates that I liked online and print them off as I was feeling lazy.

I'm glad I did, as I think it makes the ghosts look a lot less terrifying and a lot more cute. 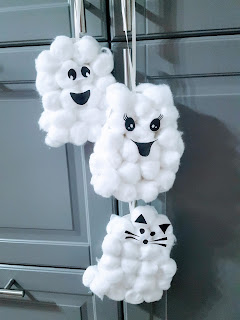 Dan Jon and I had a blast making these, and yes they are probably more suitable to toddlers or younger children, but who cares?! Crafting is fun no matter what your age and these spooky Halloween Ghosts are quite happy hanging out in our Kitchen.
Craft Family Life Funny Halloween