A Monumental Moment for Dan Jon

- February 07, 2019
This week saw a monumental moment in the A Mother's Ramblings household and one that passed without much of a fanfare. You see, this last week Dan Jon started to grow up, well School grow up. He changed from being my "little Primary Schoolboy" to being my "almost at Secondary Schoolboy".

Dan Jon will be taking his SATs the week of his 11th Birthday and like Top Ender, Dan Jon isn't that worried about taking the SATs, all he is thinking of is how his friends might not be up to celebrate, because they will be mentally exhausted.

Dan Jon isn't worried about his own mental exhaustion, because he understands from the number of times I told Top Ender, that the test is more about how well his teachers have taught him rather than how well he has learnt. 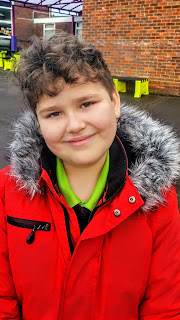 Just like when Top Ender took them, we'll prepare Dan Jon mentally to take the SATs. We will spend the next twelve weeks, not practising his handwriting, or his spelling or drilling him on SPaG and firing times table questions at him, but we will spend the next three months strengthening him, loving him and letting him be the funny, smart, adorable young man that he is.

We will let Dan Jon know that as long as he tries his best, then that is good enough.

We will let Dan Jon know that we love him and that love is not conditional.

We will let Dan Jon relax by reading, playing on the consoles, watching Youtube or Netflix.

We will feed Dan Jon foods that he likes and some he doesn't but are good for him.

We will make sure that Dan Jon gets some exercise and plenty of fresh air.

We will make sure that Dan Jon laughs as much as he can.

We will make sure that Dan Jon knows he is loved.

And the week of his birthday/exams? We'll keep it up.
Family Life Life Lessons life skills Mental Health School